Indonesia Proposes Follow-up the implementation of the Asian-African Partnership 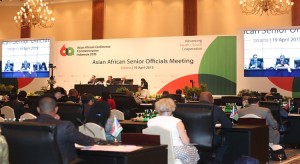 Director General for Asia Pacific and Africa Cooperation, Ministry of Foreign Affairs, Yuri Thamrin said Indonesia filed a follow-up to the implementation of the New Asian-African Strategic Partnership (NAASP) in the Senior Officials Meeting (SOM) of the 60th KAA.

Yuri Thamrin explained, that the discussion of the three documents the results of the Asian-African Conference (KAA), namely Bandung Messages, Strengthening of NAASP and Palestinian Declaration, is a series between vision and implementation.

“It’s like this, here we are talking about a vision to strengthen the Asia-Africa because the potential is huge, for example, with 70 percent of the world’s population, so we believe in stronger and Richer Africa,” Yuri Thamrin said.

The vision strengthening of Africa in the political, social, economic, and cultural are poured in Bandung Messages, while the program and the implementation contained in the document Strengthening NAASP.

“When talk about the program, I saw there are many who give a commitment to NAASP, then of course we did not stop only on the program,” Yuri said.

Therefore, Indonesia also proposed a follow-up to run a check and evaluation of the implementation.

“The implementation mechanism has been agreed,” Yuri said.

Agreed follow up mechanism, there are Commemoration KAA once every ten years, rotation every four years, a ministerial meeting on the sidelines of the UN General Assembly every two years, and a meeting between the Chairmanship holder together once a year.

“The regularly meeting is important to provide strategic direction in the ministerial level,” Yuri said.

The SOM closed at 22.30 with the agreement of all delegations on three-draft outcome document of KAA.

On Monday (19/4) morning, Minister of Foreign Affairs of Indonesia, Retno Marsudi will open the Asian-African Ministerial Meeting (AAMM) in JCC.