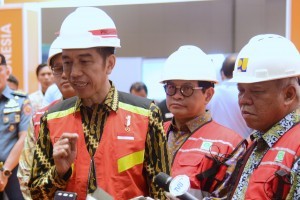 President Joko Jokowi Widodo strongly protested Saudi Arabia for carrying out execution of an Indonesian Migrant Worker (TKI) Tuti Tursilawati on Monday (29/10), without prior notice to the Indonesian Government and officials.

The Government has also called Saudi Arabian Minister of Foreign Affairs and protested the execution, President Jokowi told reporters at the opening of the 2018 Indonesian Construction Exhibition and 2018 Indonesia Infrastructure Week, as well as the Acceleration of Construction Workers Certification, at Kemayoran, Jakarta, Tuesday (10/31).

Based on the information from Migrant Care, it is known that Tuti Tursilawati, an Indonesian migrant worker from Majalengka Regency, West Java Province, was executed on October 29, 2018, without prior notification to the Indonesian Government.

Tuti, who started her work in Saudi Arabia on September 5, 2009 in Taif city, West Mecca, was sentenced to death in June 2011 after found guilty by the Saudi Arabian Court of committing an act that caused the death of her employer on May 11, 2010.

According to Migrant Care, at that time, Tuty was fought back from an attempted rape by her employer and accidentally caused his death.

President Jokowi explained that the Government had summoned the Indonesian Ambassador to Saudi Arabia to reiterate the Indonesian Governments protest for the absence of notifications in Tuti Tursilawati execution.

The President further explained that he had conveyed to Adel in a meeting with the Minister last week, about the need to protect Indonesian migrant workers in the country, adding that he has ordered Minister Retno to facilitate Tuti Tusilawatis family to visit Saudi Arabia.

The President also once again affirmed that the Government had repeatedly asked Saudi Arabia high-ranked officials such as King Salman, Prince Muhammad bin Salman, and Minister of Foreign Affairs to increase concerns on the protection of Indonesian migrant workers.