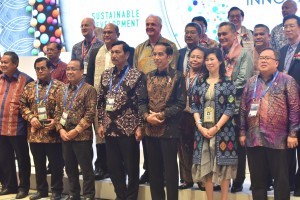 President Jokowi went on to say, a politician or technocrat is usually very busy thinking about various policies and statistical data but often forget the ultimate goal of everything is to provide happiness to other people.

Regarding the relationship between economic growth and happiness, the President mentioned a survey conducted by American Insurance Company CIGNA released in May 2010, which stated that loneliness causes a person to smoke 15 cigarettes per day.

This survey was conducted by Signa Insurance of 200 thousand young people in America, whose age are between 18-20, who are likely to feel isolated from their parents whose age are among the 72-year-old group, the President said, adding that earlier this year the United States appointed a Minister to handle Loneliness.

Meanwhile in 2018, in the annual survey conducted by the International Public Relations Firm, Edelman, which called The Annual Edelman Trust Barometer, Indonesia was ranked second in the world in terms of public trust in government, next after Switzerland.

Therefore, if people want to find a place of happiness, President Jokowi suggested to visit Indonesia.

Maybe you can travel around the country later and spend on your tourism dollars to try to find out. Once again, spend some of your dollar tourism to try to find out, said President Jokowi followed by applause from the forum participants.

This is one of the happiest music in the world, said the President.