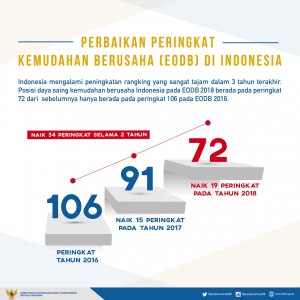 Infographic of the Increase in Indonesias Ease of Doing Business

Indonesia ranked 72nd out of 190 countries in the 2018 Ease of Doing Business, according to the World Bank’s latest report entitled “Doing Business 2018: Reforming to Create Jobs”. This means Indonesia rose by 19 positions compared to 2017, where Indonesia is ranked 91.

This achievements continue the trend of accelerating the increase in ranking in the past two years. In 2017, Indonesia’s position rose by 15 positions from 106 to 91. Thus, in the past two years, Indonesia has climbed 34 positions. Earlier, in the 2017 EODB, Indonesia’s position is ranked between 116 and 129. “In the past three years, Indonesia has become an easier place to do business. This achievement is inseparable from the hard work of all parties,” Coordinating Minister for the Economy Darmin Nasution said in a press release, Wednesday (1/11) afternoon.

In comparison, the development of other ASEAN countries’ rankings in the past 2 years include: Vietnam rose by 23 positions, Thailand rose by 20 positions, Malaysia fell by 2 positions and the Philippines fell by 14 positions.

When it comes to the target set by President Jokowi in order for Indonesias EODB ranking to be in 40th, Coordinating Minister Damin revealed the steps to be taken by the Government, such as: improving the EODB 2018 ranking (144th) of starting a business by reducing licensing procedures and implementing online system services.