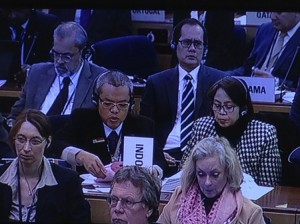 The Deputy of Maritime Affairs of the Cabinet Secretariat, Ratih Nurdiati (right) attending the meeting of International Maritime Organization (IMO), in London, England, on 27 November 2015

According to the recapitulation of supports at 10.06 a.m (London local time) on Friday (27/11), Indonesia was re-elected as a member of the C Category of the International Maritime Organization (IMO)s Council for 2015-2017 period by gaining 127 votes. The election was held at the 29th Session of IMO Assembly at the IMO Headquarter Office in London, England.

The appointment strengthens Indonesias bargaining position in international level, particularly related to maritime issues in accordance to Indonesias priority development programs for the next 4 years, as the world maritime fulcrum.

Besides accelerating the accessions, Cabinet Secretariat team, lead by the Deputy of Maritime Affairs of the Cabinet Secretariat, Ratih Nurdiati, has contributed as a team to lobby the partner countries, including Russia, New Zealand, Palau, Montenegro, Libya, and Kiribati for the sake of Indonesias proposal to become C Category member council.

Several preparations and lobbying have been made, including the contribution of Indonesian Cabinet Secretariat to the accessions acceleration of Ballast Water Management Convention which has been regulated by the President in a Presidential Regulation Number 132 of 2015 on the Ratification of International Convention for Control and Management of Ships Ballast Water and Sediments, 2004. For the records, the notification charter was handed by the IMO Secretary General on 24 November 2015.

The A Category consists of 10 countries that have roles and interests in providing international shipping services, among others: China, Greek, Italy, Japan, Norway, Panama, Korea, Russia, England and the United States.

Meanwhile, the B Category consists of 10 countries that have maximum interest in international seaborne trade, among others: Argentina, Bangladesh, Brazil, Canada, France, Germany, India, Netherlands, Spain and Sweden.

The elected council is IMOs exclusive organ and it shall conduct the First Council Meeting on 30 November 2015 to 2 December 2015 to elect the chairman and vice chairman for 2015-2017 period.

The Minister of Transportation Ignasius Jonan on the General Statement of the 29th Session of the 2015 IMO Assembly said that Indonesia as the largest archipelagic state in the world, geographically lies between Pasific and Indian Rims, and between Asia and Australia continents, as well as lying at strategic international shipping route and as a gateway of global economy.

The Minister mentioned that Indonesia has actively participated in IMO activities since its membership in 1961. Indonesia is committed to meet the IMO standards regarding the safety, particularly on human resources, such as actively participate in maritime training and education. It is important considering Indonesia has the second largest number of passengers in the sea, the Minister said.

Currently, Indonesia volunteered to become the C Category member council according to geographical representation. The target of becoming a member of B Category according to the high amount of sea transportation industry will be achieved in 2017.

The Minister explained that the administration of President Joko Widodo will pay more attention to maritime development. Sea toll project is one of Indonesian Governments concrete support to materialize Indonesia as the world maritime fulcrum, the Minister said.

According to the Minister, Indonesias re-election as IMO member council is a form of acknowledgment and appreciation from international society to Indonesias active role and possitive contribution in several IMO activities in the world.

For the records, International Maritime Organization (IMO), headquartered in London, formerly known as the Inter-Governmental Maritime Consultative Organization (IMCO), was established in 1948 by the United Nations. Its task is to coordinate maritime international safety and the implementations. IMO is promoting inter-governmental and inter-industry cooperation in order to improve safety on maritime and to prevent sea pollution.

IMO is supported by a secretariat office which employees are the representatives of the organization’s members. The secretariat is comprising of a Secretary-General who is periodically elected by the assembly, and various divisions, including Inter-Alia, Marine Safety, Environment Protection and a conference section.