Indonesia Ready to Bid for the 2032 Olympics: President Jokowi 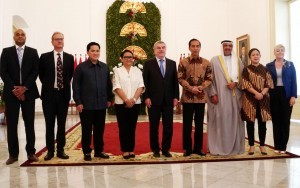 Following the great success of organizing the 2018 Asian Games, President Joko Jokowi Widodo said  that Indonesia will bid to host the 2032 Summer Olympics.

President Jokowi made the statement after meeting with President of the International Olympic Committee (IOC) Thomas Bach and President of the Olympic Council of Asia (OCA) Sheikh Ahmad Al-Fahad Al-Sabah in the Bogor Presidential Palace, West Java Province, Saturday (1/9).

On that occasion, both President of IOC and OCA showed their appreciation of the Asian Games in terms of the amount of public participation and volunteers.

Not only things related to organizing (the event), but also related to Indonesia ability to invite public participation, as well as to move volunteers in a very large number, President Jokowi said, adding that this is a strong point of Indonesia.

With this excellent experience, President Jokowi expressed his belief that Indonesia is able and fully ready to host a bigger sporting event. Indonesia has planned to immediately register itself as a candidate for the 2032 Olympics host, the President said.

For the record, the Asian Games, which with 17,000 athletes and officials is similar to the Olympics in size, opened on August 18 with an explosive ceremony. Following Tokyo 2020, the next Summer Olympics will be held in Paris in 2024, and Los Angeles in 2028. In the meantime, 2032 is the next available year to host the summer Games.

Other countries that have expressed interest in bidding for the 2032 Games are from China, Australia, India, Germany, Russia and Egypt.