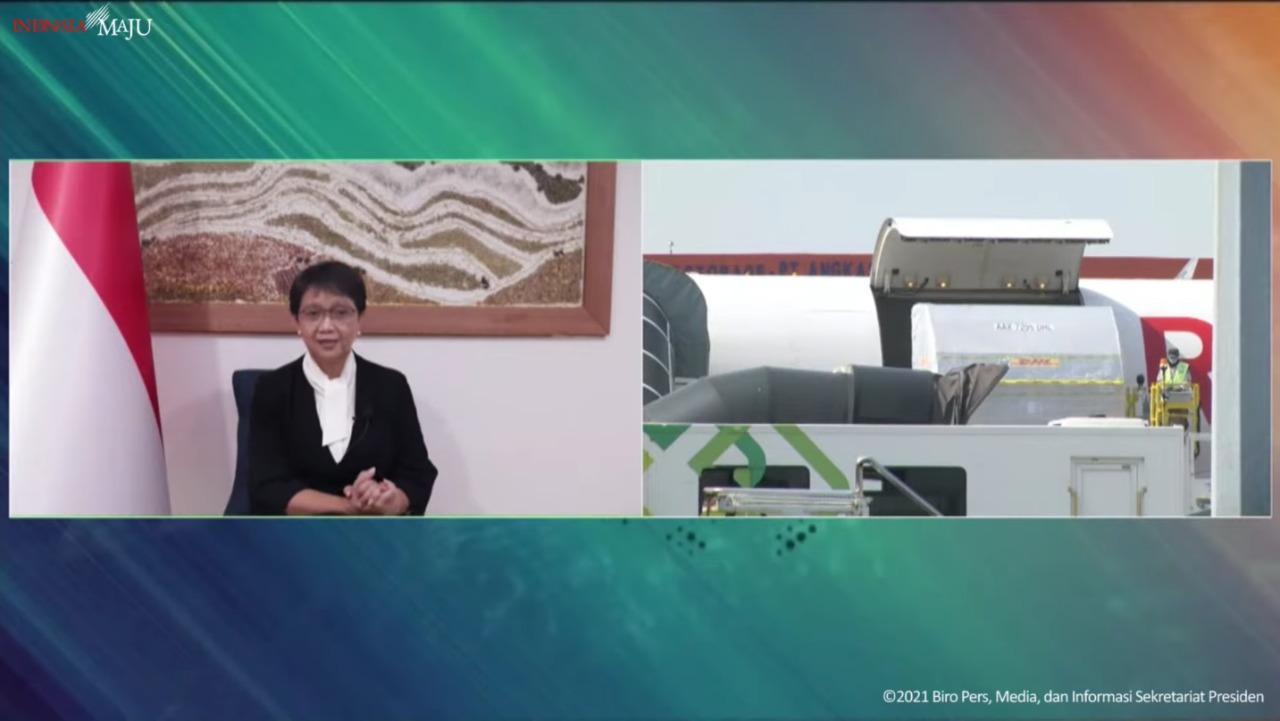 Indonesian Minister of Foreign Affairs Retno LP Marsudi delivers press statement on the arrival of COVID-19 vaccines from the US and France, Friday (17/9) (Source: Youtube Channel of Presidential Secretariat)

Indonesia received support for the COVID-19 vaccines from the United States (US) Government and the French Government through a dose-sharing mechanism on Friday (17/9).

“On behalf of the Indonesian Government and the Indonesian people, I would like to express gratitude and high appreciation to the United States and France. Thank you for your friendship and solidarity,” said Minister of Foreign Affairs Retno LP Marsudi in a press statement virtually, Friday (17/9).

Retno underlined the importance of the arrival of dose-sharing vaccines from the two friendly countries in efforts to deal with the global pandemic.

“The continued arrival of dose-sharing vaccines proves that Indonesia’s vaccine diplomacy efforts have given real benefits for the people,” she said.

To date, Indonesia has received 2,632,500 doses of Pfizer vaccine dose-sharing support from the US Government through the COVAX Facility.

This batch is part of 4,644,900 additional doses of support from the US via a dose-sharing mechanism. Furthermore, the third shipment of 1,140,750 doses is planned to arrive on 19 September and the fourth shipment of 871,650 doses will arrive on 23 September.

Apart from the US Government, Indonesia also received 968,360 doses of AstraZeneca vaccine supported by the French Government through the COVAX Facility on Thursday (17/9).

This is the second phase of delivery of a total support commitment of three million doses of vaccine from the country, Retno said, added that until now, the total dose-sharing vaccine received from France is 1,327,060 doses.

“This dose-sharing from the US and France has shown Indonesia’s strong partnership with the US and France. It is also a manifestation of the commitment of all countries to continue to collaborate in dealing with this pandemic,” Retno remarked. (TGH/FID/UN) (EST/MMB)