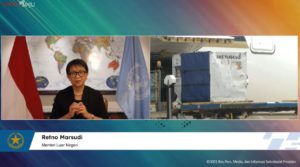 Minister of Foreign Affairs Retno LP Marsudi in a virtual press statement in welcoming the arrival of the 78th stage of the COVID-19 vaccine, Friday (24/9). (Source: Presidential Secretariat’s Youtube Channel)

Indonesia on Friday (24/9) received two million doses of vaccine from the Government of the People’s Republic of China (PRC) and the Sinovac company.

Previously on Tuesday (21/9), Indonesia had also received as many as 200,000 doses of Sinovac vaccine, supported by the Chinese Red Cross.

Retno expressed appreciation to all parties who have provided this support.

“I express gratitude and appreciation for the vaccine support provided by the Chinese Government, the Sinovac company, and also the Red Cross Society of China,” she said.

With the arrivals of these vaccines, said Retno, the number of vaccines that have arrived in the country is 273.6 million, both in the form of ready-to-use vaccines and raw materials.

Closing her press statement, the Foreign Minister again emphasized that solidarity between countries is the key to ending the global pandemic.

“Cooperation is the key. Our diplomatic machine continues to work together in various forms so that our vaccine needs are fulfilled,” she said.

In the meantime, the Chinese Ambassador to Indonesia Xiao Qian said that this support was an additional support for the handling of the pandemic from the Chinese Government, following the donation of 120 ventilators, 400 oxygen generators, and other medical devices that had been delivered last August.

“Until now, Sinovac and Sinopharm have delivered 215 million doses of vaccine to Indonesia. It accounts for almost 20 percent of all vaccines exported by China in the same period and more than 80 percent of the total vaccines obtained by Indonesia,” said the Chinese Ambassador.

Xiao Qian said that since the beginning of the pandemic, China and Indonesia have supported each other’s efforts to handle the COVID-19 pandemic in their respective countries.

“Under the strong leadership of President Joko Widodo and the efforts of all Indonesian people, China believes Indonesia will be able to deal with the pandemic in the near future and restore its socio-economic growth as soon as possible. China will continue to support Indonesia and its efforts in dealing with the pandemic,” he said. (TGH/UN) (EST/LW)