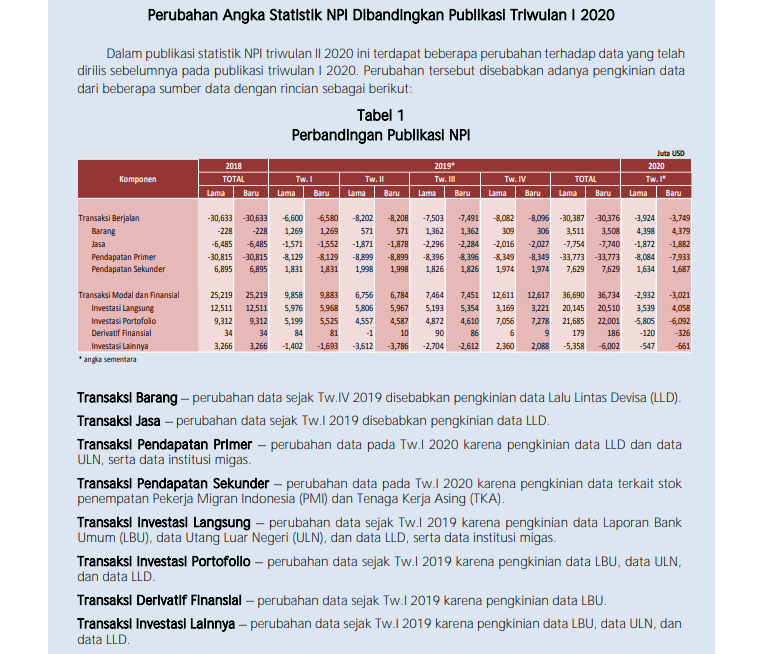 “The BOP surplus stood at US$9.2 billion in the second quarter this year after seeing a deficit of US$8.5 billion in the previous quarter. Improved performance in the balance of payments is sustained by a drop in the current account deficit and a large surplus in capital and financial transactions,” said Head of BI Communication Department Onny Widjanarko, Tuesday (18/8).

In line with the development of the balance of payments surplus, Onny noted that the position of foreign exchange reserves at the end of June rose to US$131.7 billion.

The position of foreign exchange reserves was equivalent to 8.1 months of financing imports and government foreign debt and was above the international adequacy standard, he added.

“The current account deficit is narrowing down, supported by a surplus in the goods balance and a narrow deficit in the primary income account,” he said.

The current account deficit, Onny continued, stood at US$2.9 billion or accounting for 1.2% of gross domestic product (GDP), lower than the deficit in the previous quarter of US$3.7 billion or 1.4% of GDP.

The narrow current account deficit originated from the goods trade balance surplus as a result of lower imports due to sluggish domestic demand.

“Income account deficit is narrowed due to reduced yield payments to foreign investors in line with the contraction in domestic economic growth in the second quarter this year, which was reflected in the decline in corporate and investment performance,” he said.

Deficit in the service account, Onny continued, rose slightly as a result of deficit in travel services due to a significant drop in foreign tourist arrivals amid the COVID-19 pandemic.

He also said the amount of remittances from Indonesian migrant workers has dropped following the contraction in global economic growth that also restrained the decline in the current account deficit.

“Capital and financial transactions in the second quarter this year recorded a significant surplus compared to that in the previous quarter in line with the easing of global financial market uncertainty,” he said.

Capital and financial account surplus stood at US$10.5 billion mainly from net inflows of portfolio investment and direct investment after the previous quarter deficit of US$ 3.0 billion.

According to Onny, portfolio investment inflows have risen in the form of global bond issuance by the Government and corporations and the purchase of Government Securities (SUN).

Direct investment, Onny further continued, also contributed to a surplus in the capital and financial account although it was relatively slow compared to the result in the previous quarter in line with the domestic economic contraction.

Other investment transactions saw a deficit due to the quarterly pattern of rising foreign loan payments due, he added.

Foreign capital inflows into domestic financial market have improved thanks to measures to stabilize and strengthen the policy mix of BI in close coordination with the Government and the Financial Services Authority (OJK).

“Going forward, BI will continue to pay closer attention to global economic dynamics that may affect the prospects for the BOP and continue to strengthen the policy mix to maintain economic stability as well as strengthen policy coordination with the Government and related authorities to reinforce external sector resilience,” he said. (BI Communication Department/EN)