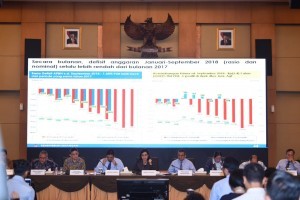 The State Budget deficit in September 2018 is recorded at Rp.200.23 trillion or equivalent to 1.35 % of Gross Domestic Product (GDP), Minister of Finance Sri Mulyani Indrawati has announced.

“The deficit is lower than that of last year. In the same period last year, the budget deficit is recorded at Rp272 trillion, (the deficit in September 2018 is) Rp.72 trillion lower,” the Minister said during a press conference at Ministry of Finance office, Jakarta, Wednesday (10/17).

The budget deficit, according to her, comes from Rp1,312.3 trillion state revenues or 69.26% of the 2018 State Budget target deficit, while the realization of state expenditure reaches Rp1,512.55 trillion or about 68.1 % of the State Budget Revenue ceiling.

To cover the budget deficit, the realization of financing carried out by the Government until September 2018 has reached Rp.292.83 trillion, mainly from debt amounting to Rp.304.94 trillion, or 76.4 % of the 2018 State Budget financing target, the Minister said.

“The realization of the debt financing consists of the issuance of Net Tradable Government Securities (SBN neto) amounting to Rp308.76 trillion (74.5% of the 2018 State Budget target) and loans (net) of minus Rp3.82 trillion or approximately 25.0% of the Government’s target in 2018.” Sri Mulyani said, adding that the growth of debt financing shows a declining trend, 25.14% lower compared to that in the same period in 2017.

Although the primary balance in September 2018 reaches minus Rp2.40 trillion, Sri Mulyani said that it is much better than the last years primary balance which reports minus Rp99.24 trillion. “This is in line with the Government’s efforts to always maintain a healthy and sustainable state budget management by reducing the primary balance deficit and pursuing surplus,” she said.

The Minister also maintained that amidst the prospects of global economic growth slowdown this year, the Government still focuses on maintaining stability and strengthening domestic economic fundamentals. “National economic stability is still in check. Deflation rates in August and September are 0.05 % and 0.18 % respectively despite the pressure on Rupiah exchange rate,” she said, adding that the realization of State Revenues is supported by Non-Tax State Revenues (PNBP) and Grants amounting to Rp1,312.32 trillion at the end of September 2018 or 69.26% of the 2018 State Budget target.