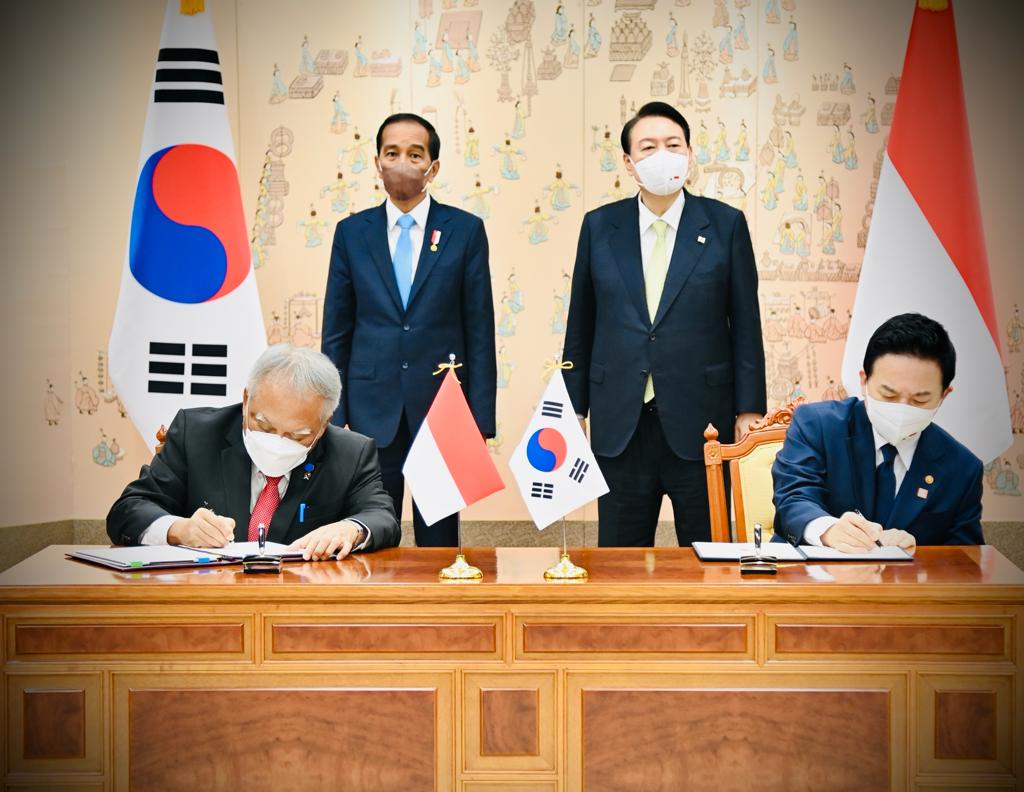 Minister of PUPR Basuki Hadimuljono signs the Protocol to Amend the MoU between Ministry of PUPR and Ministry of Land, Infrastructure and Transportation of the Republic of Korea on Technical Cooperation on the Transfer and Development of the National Capital, Thursday (07/28), South Korea. (Photo by: BPMI Presidential Secretariat/Laily Rachev)

Minister of Public Works and Public Housing (PUPR) Basuki Hadimuljono has stated that there are collaborations that have been and will be carried out between the Indonesian Government and the South Korean Government.

“We have collaborated with Republic of Korea’s Ministry of Environment and the Ministry of Land, Infrastructure and Transportation (MOLIT) several years ago. The collaborations are including the construction of Karian Drinking Water Supply System and its water treatment plan and distribution network in Banten to supply West Jakarta’s raw water. We are also currently carrying out feasibility study for Semarang Smart Water System,” Basuki said.

According to the Minister, during President Joko Widodo’s last working visit to South Korea, there are four agreed concrete cooperation, especially for the development of National Capital (IKN) of Nusantara.

“First, the South Korean Ministry of Environment will help through grants for the construction of water purification installation with a capacity of 300 liters per second,” Basuki said, adding that he also visited similar water installation yesterday and consider it as the best available technology that has been applied by South Korea.

Second and third collaboration are the construction of a wastewater treatment plant and smart village in the IKN that will consist of 100 housing units as a pilot project. “We have also visited Busan Eco Delta Smart City and Smart Village in 2019 and we have seen how it progresses after three years,” Basuki added.

Fourth, the construction of an immersive tunnel that is in line with the concept of a forest city to connect the IKN with Balikpapan city.

“We will try to build an immersive tunnel like in Geoje, Busan in order to protect bekantan (proboscis monkeys) as well as other endemic fauna and flora around Balikpapan Bay. The feasibility study is currently being carried out and this year it will proceed to the basic design, so we can start the construction in 2023,” Basuki remarked. (PR of Ministry Public Works and Public Housing/UN) (GWH/LW)