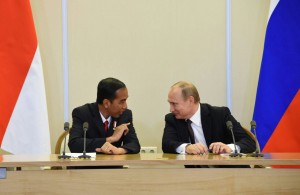 We believe that there are ample opportunities to establish economic cooperation between Indonesia and Russia and we have agreed to cooperate to remove tariff and non-tariff barriers, including on palm oil, President Jokowi said in a joint press statement with President of Russia Vladimir Putin after a bilateral meeting on Wednesday (18/5), at the Bucherov Rucey, Sochi.

Both leaders have also agreed to continue encouraging Russias investment in Indonesia, particularly on maritime and infrastructure sectors. For example by investing in railway and seaport projects in Kalimantan as well as on fuel, energy, and electricity sectors, the President said.

The meeting also produced an agreement to strengthen cooperation on defense, technology transfer, joint production, as well as education and training.

We will continue cooperating to eradicate terrorism and we also have agreed to improve intelligence data exchange against terrorism, the President added.

In the tourism sector, both leaders have also agreed to promote tourism so that more tourists will visit each others countries.

It is an honor for me to invite President Vladimir Putin to visit Indonesia,” President Jokowi said at the end of his statement.

After the bilateral meeting between President Jokowi and President Vladimir Putin, five agreements were signed by the two countries, including: