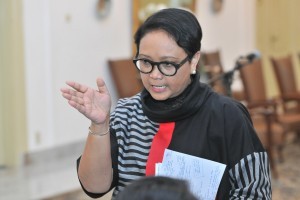 “President Jokowi and President Moon Jae-in have a very good relation which can strengthen a mutually beneficial relation between two countries,” Retno said.

Indonesia, the Foreign Minister continued, also considers South Korea as one of Indonesia’s important partners in Asia. In the midst of the worlds uncertainty, cooperation between Indonesia and South Korea in the economy, trade sector, and investment continue to grow significantly, she said.

“In the trade sector, there was almost 12 percent growth in 2017 while South Korea’s investment in Indonesia is also one of the top 10,” Retno said, adding that the Indonesian Government aims to maintain the good momentum to strengthen mutually beneficial relations in the future.

Retno added that the Presidents visit also seeks to strengthen the relations between young generations of Indonesia and South Korea.

Retno further said that another purpose of President Jokowi’s visit to South Korea is to provide consistent, continuous support to the peace process on the Korean Peninsula.

After South Korea, President Jokowi is scheduled to pay a working visit to Hanoi, Vietnam. According to Retno, this visit is an invitation from Vietnamese Government.

According to her, President Jokowi will have two major agendas during the visit, namely state visit and attending the World Economic Forum (WEF) on ASEAN. President Jokowi along with other ASEAN leaders will attend the event, she said.

With population of more than 95 million, according to Retno, Vietnam has a large number of middle class and youth population and this is a huge potential for Indonesia to boost cooperation with Vietnam.

Retno added that the main focus of thie visit is to strengthen economic cooperation and investments between two countries.

Especially on export, Retno reminded that at the beginning of this year the President met with Vietnamese Prime Minister to specifically discuss the issue of Indonesian automotive exports to Vietnam, which at that time was disrupted due to new regulations.

President Jokowi is going to overview the implementation of the new regulations and to see if Indonesias automotive can start exporting to Vietnam,” Retno said.

President Jokowi and his entourage is scheduled to leave for South Korea from Jakarta on 9 September.