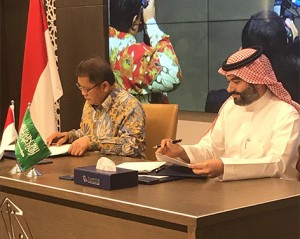 “We are committed to making this collaboration not just an MoU, but an MoA, a Memorandum of Action,” Rudiantara said.

Rudiantara went on to explain the potential for cooperation between both Governments, especially related to Umrah (small hajj pilgrimage).

“Umrah market is a potential captive market for both Saudi Arabia and Indonesia because all Muslims will perform Umrah,” he stated.

The collaboration includes the initiation to develop Umrah Digital Enterprise, which is believed to be a joint solution to solve the main problems regarding Umrah services. Two Indonesian unicorns, Tokopedia and Traveloka will take part in this collaboration as representatives of the Indonesian industry.

We are proud to be able to present 2 unicorns from Indonesia, Tokopedia and Traveloka. I believe this is the beginning of our collaboration in the digital economy to support Saudi Arabia’s Vision 2030 as well as the vision of Indonesia to be the largest digital economy in ASEAN,” Rudiantara said.

A number of technical discussions will be carried out as a follow up to the signing. One of them is the empowerment of SMEs and their supporting ecosystems in the form of expert exchanges and training.

“I believe this partnership is very unique and special. We collaborate with the largest Muslim population (country) in the world. I believe we can do more extraordinary things,” Abdullah Al-Swaha said after the signing.

Over the past four years, relations between the two countries have continuously improved. King Salman’s visit to Indonesia in 2017 and President Joko “Jokowi” Widodo’s visit to Saudi Arabia recently have resulted in various collaborations and cooperation agreements. Both countries have agreed to establish a new axis known as Saunesia (Saudi Arabia-Indonesia) and actively took part in economic, security, cultural and pilgrimage collaboration. (Ministry of Communications and Informatics PR/ES)