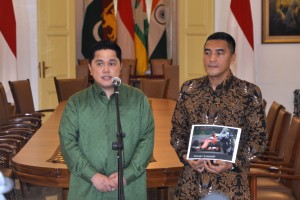 Indonesia is seeking possibility to host Formula One racing in 2021 to improve the country branding, President Joko “Jokowi” Widodo has said.

“The President said that the possibility for F1 racing competition to be held in the country should be explored. This should be seen as an effort to boost the nations branding and to expand its sport tourism,” President Director of the Indonesia Tourism Development Corporation (ITDC) Abdulbar Mansoer said in Bogor Presidential Palace, West Java, Wednesday (22/5).

The ITDC President Director also expressed his readiness to support the Government’s program. “We will immediately follow up the President’s directive to review the possibility that F1 could be held at the Mandalika Circuit,” Abdulbar said.

According to Abdulbar, Indonesia Tourism Development Corporation (ITDC) will coordinate with the related parties to cooperate on the F1 racing project.

He further said that the Government also fully supports the existing MotoGP project in Mandalika. In fact, Abdulbar added, President Jokowi conveyed in his press statement that Ministry of Public Works and Public Housing (PUPR) plans to establish an access road from the airport to Mandalika, as well as the airport’s runway widening. The Government will also renovate seaport for cruise ships, he added.

Abdulbar went on to say that the Mandalika circuit is currently undergoing a homologation stage to meet the standards for hosting international motorcycle racing.

“The Mandalika circuit project will take approximately twelve months. The circuit construction will be 4.3 kilometers. The area can also function as F1 circuit,” Abdulbar said, adding that there will be no significant changes in the budget or in the circuit’s structure.

In the meantime, Chairman of Indonesian Olympic Committee (KOI) Erick Thohir said that the construction of the circuit is cost-effective, adding that this project can be associated with nation future investment in sports tourism.

“We know that Indonesia is exploring not only halal tourism but also the possibility to become a country that can compete with neighboring countries such as Thailand, Malaysia in sports and cultural tourism,” Erick said. (GUN / OJI / ES)