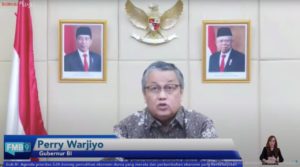 There are five priority agendas in the finance track related to central bank cooperation during the Indonesia G20 Presidency in 2022, Governor of central bank Bank Indonesia Perry Warjiyo has said.

“There are seven priority agendas in the financial sector, five of which are the cooperation among central banks,” said Perry in a joint press statement on Indonesia G20 Presidency in 2022, Tuesday (14/9).

The five priority agendas in the Indonesia G20 Presidency Finance Track are as follows.

Perry explained that the global economy has started to improve but has not been balanced yet. While most developed countries have started to recover, developing countries still have to encourage economic growth and require monetary, fiscal, and financial stimulus policies.

“Therefore, we need to carry out a coordination in the G20 so that global economic recovery can be more balanced and does not cause a spillover effect on developing countries,” he said.

He added that developed countries have also planned to reduce the easing of policies in the financial sector, such as easing in regulations regarding credit and financing. On the other hand, developing countries still need it.

“Coordination at the G20 level on this issue should be well planned, well calculated, and well communicated so that they can recover together to support economic recovery and reduce or eliminate unwanted impacts on developing countries,” he added.

Second, efforts to overcome the permanent impact of the pandemic to encourage stronger growth.

The pandemic has caused massive global economic disruption, both from the supply and the demand sides and left a scarring effect on the economy in the long run. Perry explained that a transformation in the financial sector is needed to be able to grow more productively, efficiently, and stronger. Efforts are needed to overcome the scarring effect due to the COVID-19 pandemic, both in the real sector and in the financial sector, he added.

“So it is not only financing for the business world in the short term but also for the long term. We need to talk on more instruments and market mechanisms that can support economic productivity and efficiency from the financial sector,” explained Perry.

Third, the payment system in the digital age.

In a time of pandemic where physical gatherings are reduced, digitization is accelerating all over the world, including Indonesia. This can be seen by the existence of two initiatives at the central bank, namely cooperation in digitalizing payment systems between countries or Cross Border Payment (CBP) and digital currency in each country or Central Bank Digital Currency (CBDC).

“The Cross Border Payment (CBP) will be encouraged so that in the future, regarding the payment system in general, with good market practices it can overcome various problems to reduce costs, accelerate as well as expand access. Digitizing the payment system will support the acceleration of economic and financial digitization,” Perry underscored, adding that Indonesia also plans to issue digital rupiah.

“This is how the central bank can support a greener economy and a greener real sector,” said Perry.

He added that the financial sector can also support various initiatives, such as expanding and issuing financial instruments that can help finance the green economy.

“Certainly, it requires the support of central bank policies, both macro and micro to support sustainable financing,” he added.

From the central bank’s perspective, support will be provided through a digital payment system, monetary and macroprudential policies that support MSMEs, and financial literacy for MSME actors. (FID/UN) (EST/MUR)