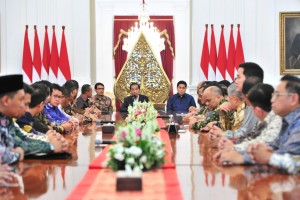 “There is a huge opportunity for Indonesia amidst the growing tensions of the two economic giants and I believe you are currently at the forefront of it,” President Jokowi said to members of the Indonesian Chamber of Commerce and Industry (KADIN) and the Association of Young Indonesian Businesspeople (HIPMI) at Merdeka Palace, Jakarta, Wednesday (12/6).

The President cited an example of the Chinese products that can no longer enter the US market since the new tariffs imposed by the US government on Chinese goods. Thus, he continued, Indonesia is expected to take advantage of this condition by increasing the capacity of the products to enter the US market, such as textiles, electronics, and furniture, which previously came from China.

This is a good opportunity for Indonesia to replace China as leading exporter in US market, he added.

On that occasion, President Jokowi also expressed hope that the Government could shift focus again on economic matters once the election issues at the Constitutional Court (MK) are resolved.