Indonesia should have Strategies to Generate Productive Things for a Better Future: President Jokowi 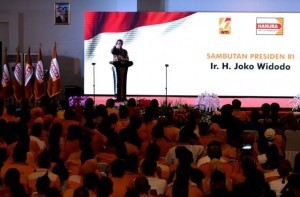 President Joko Jokowi Widodo said that the Indonesian people need energy, including the Peoples Conscience (Hanura) Party in order to cope with various problems. The President expressed hopes that we should not have to spend our energy for unnecessary, unproductive things, just as we have experienced lately.

When attending the 10th Anniversary of the Hanura Party and the Opening of the Hanura Partys Extraordinary National Congress (Munaslub), at the Hanura Central Executive Board (DPP) Headquarters at Jalan Mabes Hankam, Cilangkap, East Jakarta, Wednesday (21/12) evening, President Jokowi gave comments on criticism directed to the Government recently, which contains hate speech that could undermine the unity and integrity of Indonesia.

“Many people forget the difference between criticism and insult. One cannot sort out which one is inciting, criticizing, hate speech, or plotting a coup. Whereas, those are different things,” President Jokowi said.

The President suggests that the Indonesian people not spend energy to discuss such things, so that development is neglected. Therefore, the President added, as a big country Indonesia should have strategies that can generate productive things to face a better future. One of them is economic strategy.

Development in the Periphery

On the occasion, President Jokowi also delivered one of the priority programs of the Government, namely the development in the periphery.

The President also recounted his experience when he first visited the Entikong Border Post (PLBN), in West Kalimantan Province, the Post is unfit for use and much different from the PLBN in neighboring countries.

The 10th Anniversary of the Hanura Party and the Opening of Munaslub was attended by the the Fifth President of Indonesia Megawati Soekarnoputri, Cabinet Secretary Pramono Anung, Minister of Home Affairs Tjahjo Kumolo and Chairman of the DPP Hanura Wiranto.

When giving a speech, Wiranto announced his resignation as Chairman of DPP Hanura and chose to concentrate as Coordinating Minister for Political, Legal, and Security Affairs. (BPMI/ES) (MUR/YM/Naster).