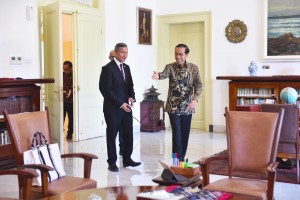 Indonesia and Singapore have agreed to further strengthen bilateral ties between the two countries.

Cooperation on human resources development, according to Retno, entails vocational schools, polytechnics, and other running programs which need improvement. “Of course, to improve it at a fast pace, we can use one TOT (training of trainers) option,” she said.

On the occasion, delegations of both countries also discussed the preparation of this year’s Leaders’ Retreat between President Jokowi and Singapore Prime Minister.

Retno further said that the Indonesian Government closely followed the results of the retreat, such as improvement in Kendal Industrial Park, establishment of furniture polytechnics in January, and continuous training for vocational and polytechnics teachers.

She added that there is also cooperation in maintenance, repair, and overhold in Bintan, Batam, and Karimun areas to support Changi airport.

“So, many things have made progress since last October. The date for this year Leaders’ Retreat is still being discussed,” Retno said. (FID/MAY/ES)