Indonesia, South Korea Trade Expected to Reach US$ 30 Billion in 2020 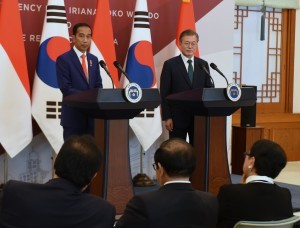 Amidst many uncertainties in the global economic condition, Indonesia and South Korea are able to strengthen relations between the two countries, President Joko Jokowi Widodo said.

According to the President, the realization of trade transactions between Indonesia and South Korea in 2017 increased by 20 percent to US$ 17 billion, of which Indonesia had a surplus of US$ 78 million.

We targeting a trade of US$ 30 billion for 2022, President Jokowi said at a joint press conference with South Korean President Moon Jae-in at Blue House Presidential Palace, in Seoul, South Korea, Monday (10/9).

I have received a report that in the 2018 Indonesia-Korea Business and Investment Forum, a number of MoUs were signed with investment potential of US$ 6.2 billion, President Jokowi said.

On that occasion, the President also expressed his gratitude to South Korea for the support of 2018 Asian Games in Jakarta on 18 August to 2 September.

We appreciated the presence of South Korean Prime Minister at the opening ceremony of the Asian Games, President Jokowi said, adding that the participation of two K-Pop idol group, iKON and Super Junior at the closing ceremony of the Games enhanced the joy of the Energy of Asia. (DNS/RAH/ES) (GWH/EP/Naster)