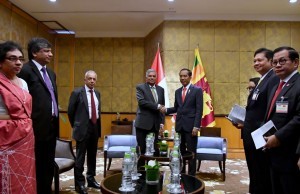 On the sidelines of his working visit in Vietnam, President Joko Jokowi Widodo  on Wednesday (12/) at Melia Hotel, Hanoi, hold a bilateral meeting with Prime Minister of Sri Lanka Ranil Wickremesinghe.

During the meeting, President Jokowi offered cooperation to Sri Lankan Government to build railway facilities and infrastructures in the South Asian country.

Indonesia offers a full package cooperation, including the purchase of train facilities and infrastructures such as rails, stations, depots and signaling systems, said President Jokowi to reporters after the meeting.

On that occasion, President Jokowi also thanked Sri Lankas support for Indonesia as a non-permanent member of the UN Security Council and appreciated the participation of Sri Lanka in the recently-concluded 2018 Asian Games.

President Jokowi also followed up several agreements from his visit to Colombo in January this year, particularly on trade issue, one of which is a joint effort between Indonesia and Sri Lanka to export ready-made garments to the European Union. Efforts to jointly submit the proposal to the European Commission regarding the delivery of ready-made garments will open up market access to the European Union. We must continue our intensive approach so that the proposal can be accepted, said President Jokowi.

In addition to that, the President also expressed hopes that the formation of working groups between the two countries in the field of trade and investment can immediately identify potential cooperation and overcome any obstacles in trade and investment. We must encourage the initial session of the working group to be held as soon as possible, President Jokowi continued.