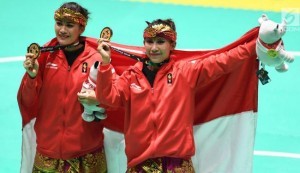 This is as a result of hard work and struggle of athletes, coaches and assistant coaches, during the training session as well as during the competitions, President Jokowi said when answering reporters questions after reviewing the Village Fund development project, in Sendangtirto Village, Sleman Regency, Yogyakarta, Wednesday (29/8).

This achievement result, the President continued, is evident. I think everyone has showed their best performance for the country, President Jokowi added.

Nevertheless, although Indonesia has already garnered 30 gold medals (until Wednesday), President Jokowi is still optimistic that there will be additional medal.

For the record, Sugianto previously won the 25th from Pencak Silat on mens singles artistic event after winning the highest score of 471 in the final round held at Padepokan Pencak Silat, Taman Mini Indonesia Indah (TMII), Jakarta, Wednesday (29/8). The silver medal for this category won by Thailands fighter Ilyas Sadara with 460 points and the bronze sealed by Almohaidib Abad from Philippines with 455 points.