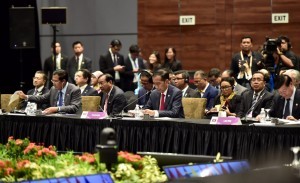 In the 21st ASEAN-Japan Summit, President Joko Jokowi Widodo stressed the importance of ASEAN to strengthening cooperation with Japan in disaster management.

President Jokowi said, Japan is known to be a region that is vulnerable to disasters that have caused huge casualties and economic losses. Data showed that in the past three decades, 40 percent of disasters occurred in the Asian region, the President added.

In the past three decades, 40 percent of world disasters occurred in the Asian region where 90 percent of them caused many fatalities and more than 50 percent caused economic losses. This years UN data predicts economic losses due to disasters in this region to reach more than USD160 billion per year until 2030, said the President.

Indonesia also has suffered great loss due to disaster. The President explained, recently, Indonesia experienced a massive earthquake and tsunami in Central Sulawesi Province that caused more than 2,200 fatalities and damaged 68,000 buildings.

Natural disasters will always be part of our lives. We cannot prevent it. However, we can minimize victims and ensure that there are enough sources to support the relief efforts, he continued.

Therefore, according to President Jokowi, there is a need for closer cooperation on disaster mitigation through cooperation on early warning mechanisms, disaster-resistant infrastructure, and funding for post-disaster reconstruction and rehabilitation.

Cooperation in financing strategies and disaster insurance is also very important. This idea has been discussed at ASEAN Leaders Gathering with the International Monetary Fund-World Bank in Bali last month, said the President, adding that this idea is important for countries located in disaster-prone areas.

Involvement and cooperation of many parties are needed to support this idea. It needs collaboration between the Government as a regulator and policy maker, insurance business groups, and the public, he said. (BPMI / EN)