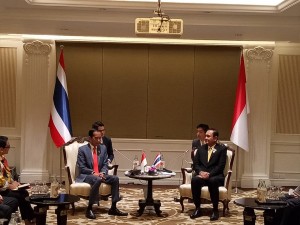 Both leaders have agreed to enhance cooperation on trade, investment, and to eliminate trade barriers.

The President also appreciated Thailands cooperation in joining hands with Indonesia to increase rubber price. He also expressed his belief that Indonesia and Thailand will cooperate well, not only for the sake of their bilateral interests, but also for the interest of the ASEAN region and the world.

Allow me to extend my full support for Thailand’s ASEAN chairmanship this year, President Jokowi stated in a press release issued by the Head of Bureau for Press, Media, and Information Affairs of Presidential Secretariat.

The Head of State also showed his appreciation for Thailands support of the ASEAN Outlook on the Indo-Pacific concept.

At the end of the meeting, President Jokowi told his counterpart that recommendations of the Preliminary Needs Assessment Mission in Rakhine State must be followed up immediately. Moreover, the President asserted the importance of a better security situation at the Rakhine State for a voluntary, safe and dignified process of repatriation.