Indonesia to Collaborate with KSA on Numerous Projects 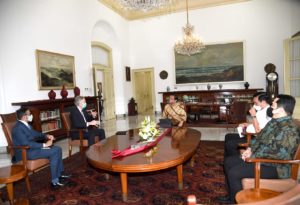 “We are doing the follow-up since Crown Prince Mohammed bin Salman (MBS) is moving swiftly and a moment ago, I reported what we should do,” Luhut said at Bogor Presidential Palace, West Java.

According to Luhut, the Crown Prince is interested in collaborating on several projects, ranging from the development of the new capital, supply of crude oil for petrochemicals, to mangroves and coral reefs.

“They are also included in our sovereign wealth fund. So, their public investment fund will be included in various projects,” the Minister said, adding that the President has also decided to establish a task force for the collaboration.

The task force will immediately work and communicate with the Kingdom, including to carry out negotiations to Riyadh in the hope they will come here to discuss the technicalities of each project and witness the projects’ potential, Luhut added.

“The Crown Prince informed me he would come to Indonesia twice this year. First, before the G20 event and he expressed hope to sign all project items with the Indonesian Government. Second, to attend the G20,” he added.

Tony Blair’s presence, he added, is to help communicate various things since the former PM is also a special envoy from the British Government for the Middle East.

“He commented that what Indonesia is doing right now is on the right track, namely downstreaming, digitizing, and building a new capital city that is linked to the integrated industrial park in North Kalimantan,” the Minister remarked. (BPMI SETPRES/UN) (GWH/EP)