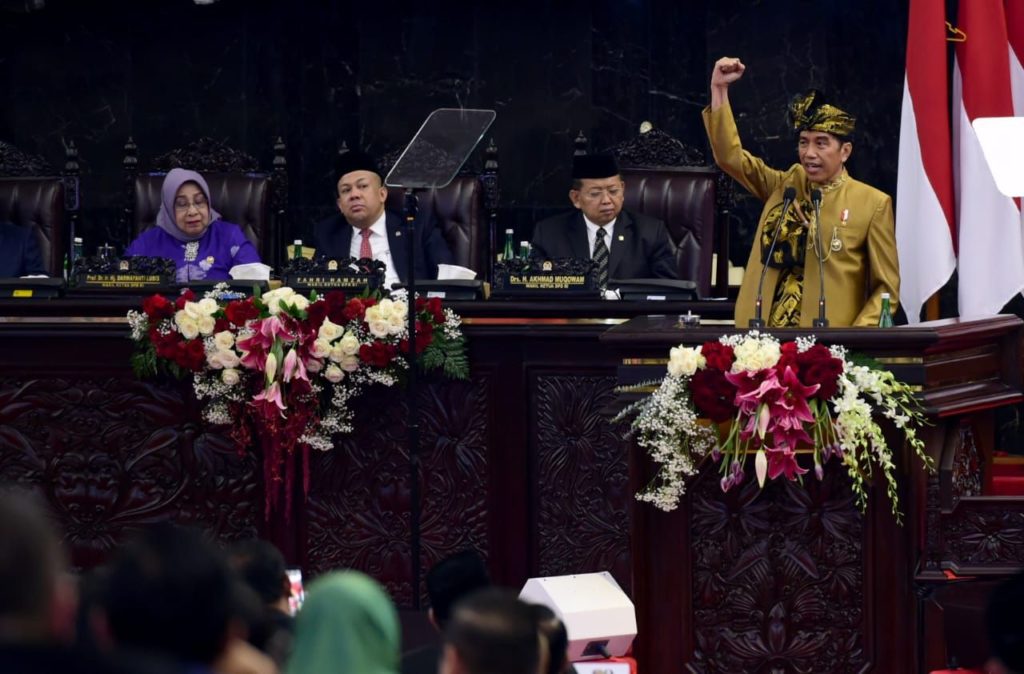 President Joko “Jokowi” Widodo delivers his State Address on the Commemoration of 74th Declaration of Independence of the Republic of Indonesia, Senayan, Jakarta, Friday (16/8). (Photo by: BPMI)

“Being better than before is not enough. Instead, we must be better than others,” President Jokowi said in his in his State Address on the Commemoration of 74th Declaration of Independence of the Republic of Indonesia before the Plenary Session of the Regional Representatives Council (DPD) and the House of Representatives (DPR), in Senayan, Jakarta, Friday (16/8).

President Jokowi went on to say that in a fierce global competition in the fight over influence, market, and investment, Indonesian people should act faster and do better than other countries. Investment should provide new employment and benefit the nation.

“We need leap by leap move because slowly but sure is no longer relevant for us. We need to be fast and sure,” he added.

The world that we live in, he continued, has not always been smooth and stable which means that not everything is certain and predictable. The country is in the face of a volatile global economy dynamics and geopolitical changes.

According to the President, climate crisis presents threats to the world and environmental destructions present threats to our world. Ring of fire that surrounds the Indonesian territory which can spell unpredictable disasters. Much of Indonesia is vulnerable to natural disasters such as earthquakes, landslides, volcanic eruptions, tsunamis, forest fires, and floods, he added

For that reason, the President said that alertness and vigilance in facing uncertainties are imperative and Indonesian people should strengthen their capacity to manage risks in the face of the volatile global economy and mitigate unpredictable natural disasters.

“Our development has to be sensitive to disaster risks. Infrastructure should be prepared in order to support disaster risk mitigation and the people must be vigilant and aware of risks,” he added.

Previously, President Jokowi said that Indonesian people should be responsive and stand ready to face cyber wars, intolerance, radicalism, and terrorism as well as to face threats of other crimes, both at home and abroad, which threaten our unity and integrity as a nation.

“Indonesia is not afraid of openness,” he said, adding that Indonesian people should face the openness with vigilance, be it against other ideologies that may harm ideology of the nation.

“We must stay vigilant to other values and cultures that are not compatible with the wisdoms of our nation and to anything that may pose a threat to our sovereignty,” he added. (MPR-DPR/ES)