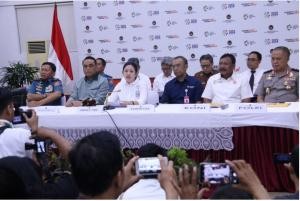 The 2018 Asian Para Games, a quadrennial sports event involving athletes with disabilities, is set to be held on 6-13 October, 2018 in Jakarta and Bogor, according to Coordinating Minister for Human Development and Culture Puan Maharani.

The Minister made the statement during a coordinating meeting on the preparation for the 2018 Asian Para Games at the office of Coordinating Ministry for Human Development and Culture, Jakarta, Monday (3/9).

The sports event, according to the Minister, will involve 2,888 athletes and 1,826 sports officials representing 41 countries, all of them will be accommodated in Kemayoran Athlete Village, Jakarta, along with 6,500 volunteers.

Puan added that the torch relay will be held prior to the event, starting from the eternal fire source at Mrapen, Central Java, on 5 September 2018, then heading to Ternate on 9 September, to Makassar, Bali, Pontianak, Medan, Pangkal Pinang, and will finish in Jakarta on 30 September 2018.

Indonesia has set the target to be in top five in the Games after finishing ninth at the previous Asian Para Games and becoming an overall champion in 2017 Sea Para Games.

On that occasion, Puan also ensured that bonuses for Indonesian athletes who win medals in the Asian Para Games will be the same as that of provided for the athletes of the 2018 Asian Games.

As for individual bronze medalist, they get Rp250 million, and Rp200 million and Rp150 million each person for double bronze and bronze for team respectively.