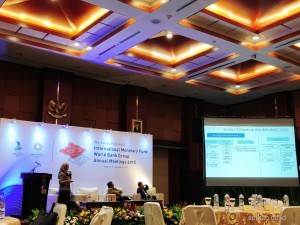 Secretary General of Ministry of Finance Hadiyanto expressed his hope that the 2018 International Monetary Fund-World Bank Group Annual Meetings – to be held in Nusa Dua, Bali, 8-14 October 2018- will get as much attention as the 2018 Asian Games.

Hadiyanto made the statement at the office of Ministry of Finance on Thursday (6/9) during the Workshop for Promoting 2018 International Monetary Fund-World Bank Annual Meeting. The workshop was attended by information officers from Government Ministries and Agencies and from State-Owned Enterprises (SoEs).

“The Annual Meeting will involve 189 countries, 15,000 delegates, and 200 meeting agendas. We are the fourth country in ASEAN to host the event,” Hadiyanto said.

According to Hadiyanto, support from the Government Ministries and Agencies as well as SoEs is needed to promote the annual event and to raise peoples awareness of the event.

“The synergy between the Government and SOEs is expected to gain public support and to create a positive image for Indonesia in the world,” Hadiyanto added.

In the meantime, Director General for Information and Public Communication of Ministry of Communication and Informatics Niken Rosarita Widyastuti said that Public Relations Officers in Government Ministries/Agencies are expected to manage the negative issues that will be discussed at the annual event, including global economic stability, poverty, employment, and Indonesia’s climate change as well as to promote Indonesian tourism, trade and investment.

“The key message of this annual meeting is that Indonesia is proud to be part of the world economic community,” Niken concluded.