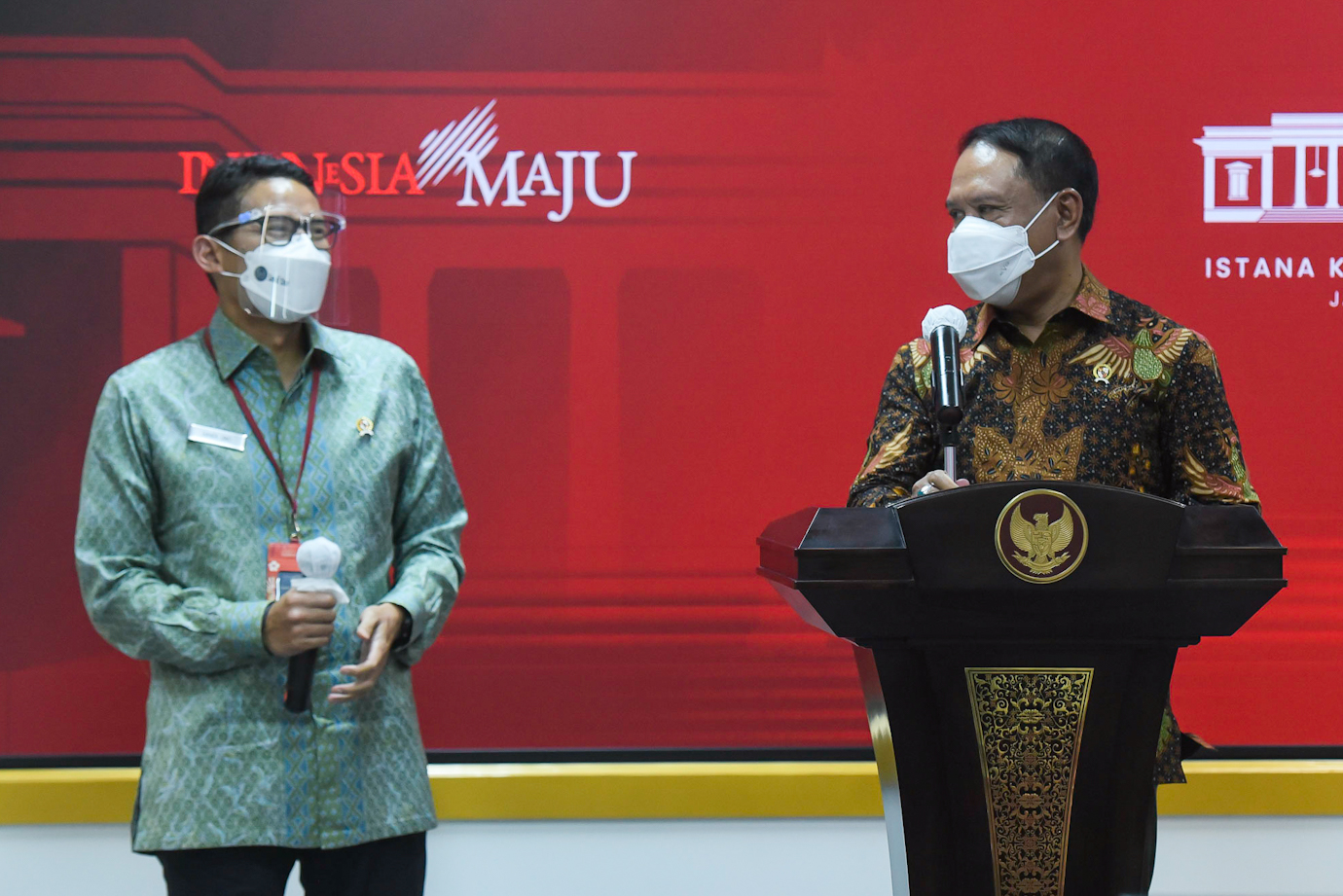 Ministry of Youth and Sports Zainudin Amali and Minister of Tourism and Creative Economy Sandiaga Uno deliver a joint press statement after attending a Limited Meeting on the Preparations for the International Basketball Federation (FIBA) Asia Cup 2021 and the World Superbike (WSBK) Indonesia Grand Prix 2021, Jakarta, Wednesday (2/6/). (Photo by: PR of Cabinet Secretariat/Agung)

The Government has announced that Indonesia will be hosting the upcoming International Basketball Federation (FIBA) ​​Asia Cup 2021 that will be held in August this year.

According to Minister of Youth and Sports Zainudin Amali, Indonesia is targeting success in organizing the international competition as well as gaining achievements in the competition.

“It is our intention to become a good tournament organizer and to have our national teamgain achievements,” Zainudin said in a press statement after attending a Limited Meeting chaired by President Joko “Jokowi” Widodo on the Preparation for the International Basketball Federation (FIBA) ​​Asia Cup 2021 and the World Superbike (WSBK) Indonesia Grand Prix 2021, Jakarta, Wednesday (2/6/).

During the meeting, Zainudin reported the readiness of facilities and infrastructures for the event as well as the readiness of the Indonesian national basketball team in facing the basketball competition between countries from the Asia-Pacific region.

In response to the report, President Jokowi called on the relevant ranks to prepare for the implementation of the international basketball competition properly.

“The President gave us directives to prepare everything as well as possible since we have limited time to prepare,” he said.

On that occasion, Zainudin revealed that the top eight placed basketball teams in the FIBA Asia Cup 2021 will automatically compete in the FIBA World Cup 2023.

Zainudin also expressed belief that the opportunity given by FIBA for Indonesia to host the cup this year can be optimally utilized to qualify for the FIBA World Cup 2023 that will be hosted by Indonesia, Philipines, and Japan.

Based on the results of the 2018 Asian Games, where the Indonesian basketball team was placed in the top eight, Zainudin is optimistic that Indonesia can achieve the target to qualify for the FIBA World Cup 2023.

“If we look back at the Asian Games, our national team is in the top eight, then InsyaAllah, we can make achievement at the FIBA ​​Asia Cup,” he closed the statement. (DND/UN) (RIF/LW)