Indonesia to Host OIC Summit, President: Be A Good Host 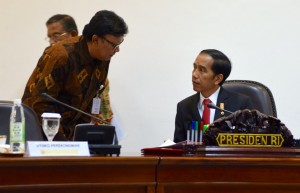 President Joko Jokowi Widodo chaired a limited meeting to discuss the preparation for  Organization of the Islamic Cooperation (OIC) Extraordinary Summit at the Presidential Office, Jakarta (3/2).

In his opening remarks, President Jokowi mentioned that OIC member countries agreed to conduct the Extraordinary Summit to discuss the boundaries of the Muslim countries in the region around Al-Aqsa Mosque.

The summit was initially to be held in Morroco but it said that it was not ready. Indonesia was requeste to replace Maroko hosting the Summit and I was asked to express my readiness to host it. I hope we could convene it well,President added.

He further said that Indonesia had successfully held Asian-African Conference because of the good cooperation between ministries, local government, and communities.

I hope the OIC Extraordinary Summit can also be a success and we become a good host, affirmed the President.

According to President, all the preparation from the beginning to end, those relating to security and safeguarding as well as other supporting facilities will be immediately prepared.

President Jokowi stated that OIC summit was part of the Governments efforts to show the world that Indonesia is a safe and friendly country; therefore, it is good to visit. Moreover, Indonesian Muslims are tolerant, rahmatan lil alamin. We could really show this to the world, the President said to end his remarks.