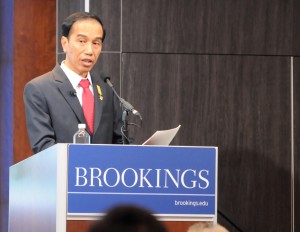 President Joko Jokowi Widodo said that one of his administrationss priorities is to make Indonesia an attractive place for investors, both domestic and international investors.

According to the President, concrete measures that have been taken are among others issuing or revising several regulations that hinder investment and simplifying procedures and cut unnecessary bottlenecks in the investment permit process.

We keep improving investment climate, including by launching  economic policy package recently. We continue to simplify procedures and eliminate uncertainties as well, President Jokowi said during a meeting with Fund Managers of the US at Willard Intercontinental Hotel, Washington DC, on Tuesday (27/10).

President Jokowi went on to say that before entering political arena, he was an export-oriented entrepreneur on furnitures for 22 years and during that time, he said that he despised red tape and activities that violated the rules.

It is important for businessmen to notice on-time delivery, competitive price, and high quality, the President said.

Therefore, as a President, President Jokowi admitted that he has priority to make Indonesia an attractive place for the investors, both domestic and international investors.

President Jokowi then expressed Indonesias intention to join the Trans-Pasific Partnership (TPP) to the President of the United States Barack Obama during a meeting at the White House, Washington DC, US.

According to the President, Indonesia is recently maintaining fiscal deficit so as not to exceed 3 percent of Gross Domestic Product (GDP) and also maintaining the independency of the central bank in maintaining price stability.

Furthermore, he added, business world and industries in Indonesia must be integrated in regional and global supply chain and in addition to regulatory issues, both must be backed with infrastructure such as ports and warehouses.

Development of infrastructures, President Jokowi noted, is the one that has recently been intensively carried out by the Indonesian Government.

President Jokowi explained Indonesia is a part of market economy, evidenced by the fact that the Rupiah exchange rate determined by the market.

Therefore, the President added, the Indonesian Government must listen to what the market says.

I am here to say that we are listening to their voices clearly, the President said, to the applause from the fund managers attending the meeting.

President Jokowi also stressed the importance to focus on one issue

“Focus is important, otherwise we can not solve the problems, the President said.

The first step is to allocate fuel subsidy to other programs that will bring more benefits to the people and the next step is to accelerate infrastructure development, he said.

And now, we are focusing on private sectors, the President said.

However, President Jokowi added, the economic reform being implemented by Indonesia could not finish in a flash.

Therefore, we are still making efforts and improvements until the whole things could run smoothly, the President said. (UN/SI/ES) (RAS/EP/YM/Naster)