Indonesia to Revise Law on Terrorism 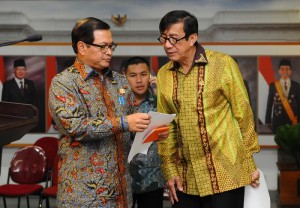 Cabinet Secretary and Minister of Law and Human Rights after a limited meeting, at the Presidential Office, Jakarta (21/1)

The Indonesian Government has decided to revise Law Number 15 of 2003 on the Stipulation of Government Regulation in Lieu of Law Number 1 of 2002 on the Eradication of Terrorism Acts.

The decision was made during a limited meeting on the prevention of terrorism and de-radicalization at the Presidential Office, Jakarta on Thursday (21/1) afternoon.

Cabinet Secretary Pramono Anung said that the decision to revise the law was reached between two alternatives, namely to issue a Government Regulation in Lieu of Law (Perppu) or to make a new law.

After listening to some opinions and inputs during the meeting, the President instructed the Coordinating Minister for Political, Legal, and Security Affairs, Chief of the Indonesian National Police (Kapolri), National Intelligence Agency (BIN), and National Counterterrorism Agency (BNPT) to revise the Law, Pramono said to the reporters after the meeting.

Pramono added the President has also instructed Coordinating Minister for Political, Legal and Security Affairs and Minister of Law and Human Rights to coordinate on the revision because based on several considerations, revising the Law on terrorism is needed; yet, he said that the Government would still prioritize the principle of presumption of innocence and human rights approaches.

During the meeting, according to Pramono, it was said that  the issue of de-radicalization could not be separated from the things that have developed in the society, particularly those related to ideology, violence, education, and social imbalance. Therefore, he added, those factors will become Governments consideration to take actions.

We hope the law can be finished in this session or the next session, at the latest, Pramono said.

The Government, Pramono added, believes that measures that have been made to tackle terrorism and radicalization so far are good enough but due to the global development, the Government has to make changes.

Pramono further said that the President has also instructed Minister of Communications and Informatics to block pages and social media accounts that promote radicalism.