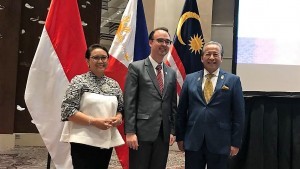 The Indonesian Government confirmed its readiness to support reconstruction, rehabilitation, and de-radicalization processes in Marawi, the Philippines after the city was liberated by the Government of Philippines from terrorists’ occupation.

Retno admitted that reconstruction and rehabilitation are heavy tasks. However, she believes that it can be accomplished, through support and cooperation, including through this Trilateral Meeting.

Indonesia waits for the Philippines Government to identify the needs required in the reconstruction and rehabilitation efforts, Retno told the reporters.

Besides reconstruction and infrastructures development, Indonesia also focused on education and de-radicalization sectors, the Minister added.

Retno further said that Indonesia is ready to support the development of curriculum in religious education, to send ulema (Islamic scholars) to spread the value of Islam as Rahmatan Lil Alamin (blessing on the universe and humanity) in Madrasa (Islamic educational institution), and to give more scholarships to the students in Marawi.

Indonesia is ready to share its experiences with the Philippines for de-radicalization and reintegration processes in Marawi, the Minister firmly said.

Retno went on to say that the success of the Filipino Government in liberating Marawi indicated strong message that with cooperation, terrorism and extremism can be defeated.

However, the Minister reminded all that the liberation of Marawi is not the final goal; in fact, she added that it is only the beginning of a greater task, which is to realize sustainable development and peace in Marawi and in the region.

After the liberation, the three countries should take another important steps which are reconstructing and rehabilitating infrastructures, reintegrating the people, and settling the root cause of the issue, as well as enhancing the cooperation in order to prevent such tragedy to reoccur in Marawi.

For that reason, Indonesia will wait for the Philippines Government to list the needs for reconstruction and rehabilitation processes.

Also in the Trilateral Meeting, Minister Alan Peter Cayetano personally gave his high appreciation to the Governments of Indonesia and Malaysia for their supports and assistances in liberating Marawi.

Considering the complexity of security challenges, particularly to prevent recurrence of such tragedies, Indonesia initiated Plan of Action and Road Map drafts that contain any concrete actions in the Trilateral Meeting. The actions, Retno added, is divided into three periods, namely short, medium and long term.

The drafts will be discussed in more details in the next Trilateral Meeting, which is scheduled to take place in Indonesia next year, the Minister added.

For the record, this Trilateral Meeting is a follow-up of previous meeting which took place in June. The cooperation among Indonesia, Malaysia, and the Philippines is established to enhance the effectivity of addressing transnational organized crimes, particularly terrorist threats in Sulu and Sulawesi waters. (SM/ES/EN)(RAS/EP/YM/Naster)