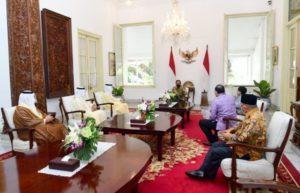 The President delivered the statement during his meeting with Minister of State for Foreign Trade of the United Arab Emirates Thani bin Ahmed Al Zeyoudi on Friday (09/03) at the Merdeka Palace, Jakarta.

Retno also said that the existing trade value of Indonesia and the UAE is US$ 2.9 billion and the CEPA is expected to increase the export twofold or threefold.

The UAE will become the main partner for investment in Indonesia and is expected to invest in infrastructure, health sector as well as green and sustainable economy.

“The President also expressed his appreciation for the UAE’s support for Indonesia during the pandemic, including the donation of 750,000 doses of the Sinopharm vaccine,” the Foreign Minister said.

In the meantime, Minister of Trade Muhammad Lutfi said that the trade agreement is very important for Indonesia to increase export to non-traditional destinations, including countries in Africa and Arabian Peninsula.

“We will conclude this agreement not later than one year. We hope that on November 4, during the President’s visit to the UAE, this agreement will be in the final stage,” the Minister said. (DND/TGH/UN) (RI/MMB)