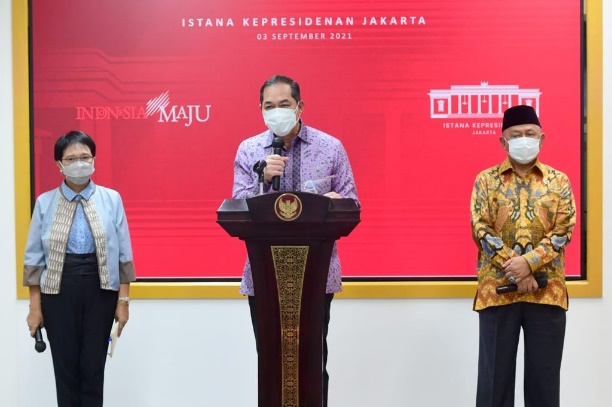 Minister of Trade Muhammad Lutfi, accompanied by Minister of Foreign Affairs Retno LP Marsudi and Indonesian Ambassador to the UAE Husin Bagis, delivers a press statement after accompanying President Jokowi to receive a courtesy call from Minister of State for Foreign Trade of the UAE, Friday (03/09). (Photo by: Presidential Secretariat/Muchlis Jr)

Indonesia and the United Arab Emirates (UAE) have made a new history after the two countries carried out the first round of negotiations on the Indonesia-United Arab Emirates Comprehensive Economic Partnership Agreement (IUAE-CEPA) on 2-4 September 2021, in Bogor, West Java.

The IUAE-CEPA is vital for both countries to increase trade and investment, for efforts to recover the economy due to the COVID-19 pandemic. The negotiations were held after the official launch of the IUAE-CEPA negotiations by Indonesian Minister of Trade Muhammad Lutfi and Minister of State for Foreign Trade of the UAE Thani bin Ahmed Al Zeyoudi, Thursday (02/09).

“The results of the first round of negotiations will be followed up with technical and intercession meetings to discuss potential cooperation, for example, in terms of support for small and medium industries, electronic commerce, and the development of the halal industry,” Lutfi said in his written statement, Monday, (06/09).

“President Joko “Jokowi” Widodo welcomed the CEPA negotiations between the two countries and expressed hope that the negotiations can be completed within a year,” he said.

For the record, the UAE is one of the destination countries for Indonesia’s non-traditional export market which is a hub for international trade in the Middle East region. Meanwhile, for the UAE, the IUAE-CEPA is the first bilateral trade negotiation with its trading partners in the Asian region.

The Director explained that the IUAE-CEPA negotiations included 17 chapters and the discussion was divided into ten working groups. The ten working groups are trade in goods, trade in services, investment, rules of origin, customs procedures and trade facilitation, economic cooperation (including small and medium enterprises), intellectual property, legal provisions and institutional issues, government procurement of goods, as well as halal and sharia economics.

“After the negotiations, the two delegations understood each other’s policies and positions and agreed on a number of follow-up steps which will be discussed in the next round of negotiations. Technical and intercession meetings will be held to provide mutual clarification and continue discussions on potential cooperation,” said Made.

For the record, the total trade between Indonesia and the UAE in 2020 was recorded at US$2.93 billion, with the value of Indonesia’s exports to the UAE standing at US$1.24 billion and imports at US$1.68 billion. Indonesia’s main export commodities to the UAE include palm oil, jewelry, iron tubes and pipes, cars and motor vehicles, and synthetic woven fabrics. Meanwhile, Indonesia’s main import commodities from the UAE include semi-finished products of iron or steel, acyclic hydrocarbons, unwrought aluminum, colloidal precious metals, and propylene polymers.