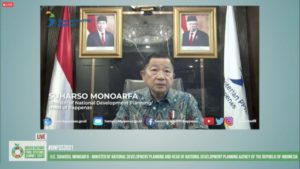 According to him, there are at least three main strategies that become priorities of the Indonesian Government.

First, to create a sustainable agricultural sector that is inclusive, resilient, and sustainable. Second, to provide special supports for small-scale farmers. Third, to boost international cooperation and multi-stakeholder partnerships.

For the record, the UN FSS meeting was initiated by the UN Secretary General Antonio Guterres as part of the implementation of the “Decade of Action for delivery on the SDGs by 2030”.

This meeting was initiated following concerns about the growing challenges faced in realizing the SDGs, in particular the SDG 2 regarding elimination of hunger and overcoming malnutrition.

Climate change and pandemics are also worsening the global food security situation. Based on the FAO data, there are between 720 to 811 million people in the world suffering from hunger in 2020 or 118 million more people compared to that in 2019.

Indonesia’s commitment to realize the transformation of the food system is also manifested in the implementation of national and sub-national dialogues, which have produced various substantive inputs to improve governance in the national food system.

The meeting was organized by Ministry of National Development Planning as the National Convenor of the UN FSS.

In this regard, Indonesia underlined the importance of avoiding a one-size-fits-all approach in the transformation of the food system, especially given the different and complex challenges in each region.

Through the UN FSS, the Government hopes that countries can join hands to realize efforts to end global hunger and poverty and to build a more sustainable, equitable and resilient food system. (PR of Ministry of Foreign Affairs / PR of Ministry of National Development Planning/UN) (EST/EP)