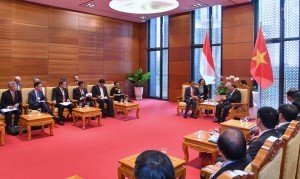 President Joko Jokowi Widodo congratulates Vietnam on the 73rd anniversary of its National Day which falls on 2 September 2018. The President conveyed the message during a meeting with Vietnamese Prime Minister Nguyen Xuan Phuc at the National Convention Center, Hanoi, Wednesday (12/9).

“I would like to congratulate Vietnam on the 73rd anniversary of the National Day on 2 September 2018, hopefully peace and prosperity will always be with the Vietnamese people,” The President said.

During the meeting, President Jokowi and Prime Minister Nguyen Xuan Phuc discussed the measures to boost cooperation and collaboration on creative and digital economy in the region.

“I would also like to express my gratitude for Your Excellencys confirmation to attend the ASEAN Leaders’ Gathering (ALG) in Bali, 11 October 2018,” President Jokowi added.

President Jokowi went on to say that the ALG is very important amidst the increasingly uncertain global economic situation. The event is also the right momentum for ASEAN to take greater role in the world.

“It is the opportunity for ASEAN to show the world its economic resilience and its strong commitment to development and poverty alleviation,” President Jokowi said.

On the occasion, the Vietnamese Prime Minister praised President Jokowi for attending the World Economic Forum (WEF) and expressed his support for strengthening the relations of the two countries to deal with global challenges.