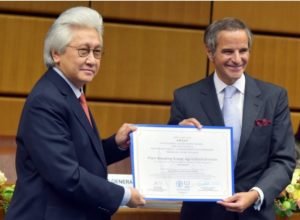 Indonesian Ambassador to the United Nations Darmansjah Djumala receives award from the IAEA and the FAO in Vienna, Austria, Monday (20/9). (Photo: PR of BRIN)

Indonesia has received an outstanding achievement award from the Food and Agriculture Organization (FAO) and the International Atomic Energy Agency or IAEA.

The award was conferred by Director General of the IAEA Rafael Mariano Grossi to the Indonesian Ambassador to the United Nations Darmansjah Djumala at the 65th IAEA General Conference session, at the UN Headquarters in Vienna, Austria, Monday (20/9).

This award was given for the achievements of research and utilization of nuclear technology in Indonesia through the Nuclear Energy Research Organization (ORTN) in the field of food plant breeding.

Darmansjah said that Indonesia through the work of nuclear researchers in the agricultural sector has demonstrated its ability to utilize nuclear technology for the development of superior varieties of food crops that contribute significantly to strengthening national food security.

“This award shows that the program which aims to strengthen the human resource capacity of nuclear technology that was initiated by the IAEA and the FAO has provided tangible benefits in strengthening human resources capacity of Indonesian researchers, including nuclear applications in the food sector,” said Djumala.

Djumala went on to say that this award also shows that Indonesia is recognized for mastering nuclear technology for peaceful purposes and applying it to support national development programs.

The results of international cooperation with the IAEA member countries, he added, also reflects the Indonesian Government’s diplomacy in the field of nuclear technology that is able to provide direct socio-economic benefits to the community through applications in the food sector, he added.

Meanwhile, Director General of the IAEA Rafael Mariano Grossi said that climate change that is hitting the world today poses a challenge for researchers to develop superior plant varieties.

“Efforts to find joint solutions need to be continued by the global community, including through the use of nuclear technology by nuclear experts in many countries who develop new superior plant varieties,” added Rafael.

Echoing a similar sentiment, Director General of the FAO Qu Dongyu said this award is a real contribution of nuclear technology to global food security.

The FAO and the IAEA, he added, will continue to support capacity building of researchers in the food sector to support sustainability of radiation mutation research.

The Outstanding Achievement Award was also given by the FAO and the IAEA to ten other countries, including China, Cuba, India, Bangladesh, Iran, Malaysia, Mali, Pakistan and South Africa. (PR of BRIN/UN) (EST/EP)