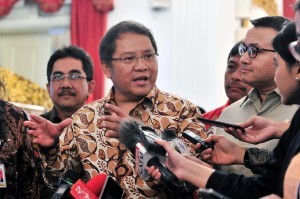 According to Minister of Communications and Information Rudiantara, the Government, corporations, universities, NGOs, and even celebrities take part in the campaign by publishing releases to counter hoax news on a daily basis.

Nevertheless, the Minister warned that the campaign alone is not enough to tackle negative things in cyber world. According to him, certain measures by involving the police for example are needed as the last resort.

Since literacy is not enough to tackle the spreading of hoaxes, we need the campaign and to take tougher actions as well, Rudiantara told reporters after the Opening of the National Public Relations Convention 4.0, at the State Palace, Jakarta, Monday (10/12).

The Minister added that all stakeholders must collaborate as the challenges get bigger day by day. He added that public relation officials also play an important role because not everyone has access to the cyber world. Therefore, he added , Government still has to deliver the message directly to the public.

Rudiantara also cited an example of puppet shows through which the Government can spread positive messages through the puppeteers. We should combine digital method and direct approaches based on the characteristics of our society, Rudiantara concluded. (FID/JAY/ES)