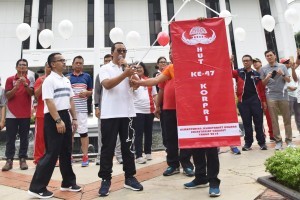 Secretary to Minister of State Secretary Setya Utama releases the balloons to mark the opening of the commemoration ofthe 47th Anniversary of KORPRI at the Ministry of State Secretariat and Cabinet Secretariat, Jakarta, Friday (2/11).(Photo by: Rahmat/Public Relations)

On Friday (2/11), Secretary to Minister of State Secretary Setya Utama opened a series of activities to commemorate the 47th Anniversary of KORPRI (Indonesian Civil Servants Corp) at the Ministry of State Secretariat and Cabinet Secretariat. By saying Bismillahirrahmanirrahim, I oficially open the commemoration of the 47th Anniversary of KORPRI at the Institution of the Presidency, Setya said and release the balloons to mark the opening.

The activities will be held from 5 to 30 November 2018. There will be social activities such as fundraising to support orphans, natural disaster victims, and blood donations, as well as sports competitions such as field tennis, table tennis, volleyball, badminton, and many more, Haris said, adding that there will be also  a singing contest, a photo competition and a standup comedy competition.

The peak event  is slated to be held at the Gelora Bung Karno Sports Complex on Sunday, 2 December 2018. On this event, there will be a family fun walk and announcement of winners of all competitions. (DND/RAH/ES)