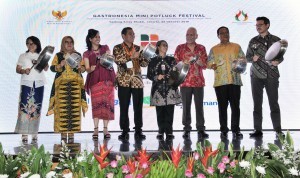 In the event organized by the Indonesia Gastronomy Association (IGA) and Cabinet Secretariat, various menus were served including buntil and botok from Central Java, Se’i from East Nusa Tenggara, Arsik and Roti Jala from North Sumatra, Sala Lauak from West Sumatra, Choipan and Tempoyak from West Kalimantan, Mie Celor and Pempek from South Sumatra, Paniki and Woku from South Sulawesi, Ikan Kuah Kuning from Papua, and other foods from several other areas.

In her remarks, Ratih Nurdiati said that the festival is a medium to know and love the food of our ancestors. “Indonesian food served in front of us, that we love and enjoy, is part of Indonesian gastronomy that was used by our ancestors to survive, Ratih Said.

After a long process of hereditary acculturation, food is no longer just a method of survival but has become part of local wisdom in choosing, sorting, mixing and cooking food.

“A good Gastronome does not have to be able to cook or be good at cooking, but the important thing is that she/he should understand about cooking skills, cooking art, or culinary art. Food is art,” Ratih added.

With variety of Indonesian culinary, large number of ethnic groups and the vastness of the territory of Indonesia, Ratih continued, Indonesian cuisine should be more attractive compared to other countries.

Some centuries ago, European nations went to the archipelago to look for spices which are the basic ingredients of Indonesian cuisine. “We should learn from this historical background, we must be more serious in addressing and designing strategies so that our food becomes the mainstay of our nation, especially in the field of tourism and more specifically culinary tourism,” Ratih said.

For the record, based on data from the World Economic Forum’s Travel and Tourism Competitiveness Index, Indonesia’s tourism competitiveness is ranked 42 out of 136 countries in 2017, eight levels higher from the previous year.

According to her, culinary-based tourism should be more integrated with other tourism aspects: destinations, events, and tourist attractions. Therefore, Indonesian cuisine should be expanded in other countries, including by opening new Indonesian restaurants abroad.