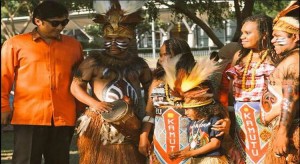 Indonesian consul in Darwin, Andre Omer Siregar, together with the dancers of Papua in Pesona Indonesia, in Darwin, Australia, on Saturday (1/8).

Australian public in Darwin fascinated by the cultural and culinary diversity, which is displayed at Pesona (Charm) Indonesia 2015, dated August 1, 2015, at Darwin Waterfront.

Consul of Indonesia to Darwin, Andre Omer Siregar said, together with the people of Indonesia, the Indonesian Consulate in Darwin this time this time featuring the Diversity that owned by Indonesia

More than 4,000 visitors who attended were presented with art and cultural performances of Aceh, Betawi, Bali, Central Java, East Nusa Tenggara and Papua, as well as modern music like dangdut Indonesia. Even, the people of Australia do not hesitate to sway with the people of Indonesia.

The Consul, Andre Omer Siregar in his speech expressed his appreciation to the committee in the preparation and organizing Pesona Indonesia in 2015.

“The Event of Pesona Indonesia in 2015 is a real contribution the people of Indonesia to the community in Darwin, as well as our desire to promote cultural diversity in the Northern Territory (NT),” Omer said.

Considering that Indonesia will commemorate of 70 years of independence, according to the Indonesian Consul, the theme of the event this year shows the richness of Indonesian culture in the past, the present and the future: The theme of this year’s activities will reflect the cultural wealth of Papua, Jakarta and Java, as seen from the dances of Papua and Gamelan music “.

Indonesian Consulate Darwin very confident that special attention of President Joko Widodo and the Government for the development of eastern Indonesia, especially the province of Papua and West Papua is an important key to encourage well-being and prosperity of our brothers in Papua for 70 years into the future.

“I invite all friends in Darwin to get to know the neighbors, especially, the importance we seek opportunities to encourage the strengthening of bilateral relations between Indonesia and the Northern Territory,” Omer said.

Peter Styles, NT Minister for Multicultural field, said that this event is an opportunity to show that Darwin is a multicultural and tolerant city. Therefore, he does not hesitate to continue to provide support for the Indonesian community in the Northern Territory.

Peter Styles underlined that Indonesia is the country closest to the NT. NT Government put Indonesia in particular because of the close relationship over the years, in addition to the proximity distance. Therefore, it is important for people in the NT to improve inter-cultural understanding.

Pesona Indonesia is the largest Indonesian promotion annual event in Darwin, which is supported by the Government of the Northern Territory (NT) and the Indonesian Consulate Darwin, as well as other sponsors. The implementation of 2015 is an event of the 16th and organized by the Association of Indonesia Darwin Inc.

Pesona Indonesia in 2015 opened with songs of Papua, which is sung by the music group Nine Hills from Jayapura and Javanese Gamelan, which is presented by Dharma Wanita of the Indonesian Consulate Darwin and the people of Indonesia Association.

Successively shown the performances of art and culture from the people of Indonesia, regional traditional clothing fashion show by Indonesian children, as well as the appearance of Victoria Band that all players are women as the closing. (KJRI Darwin/ES)