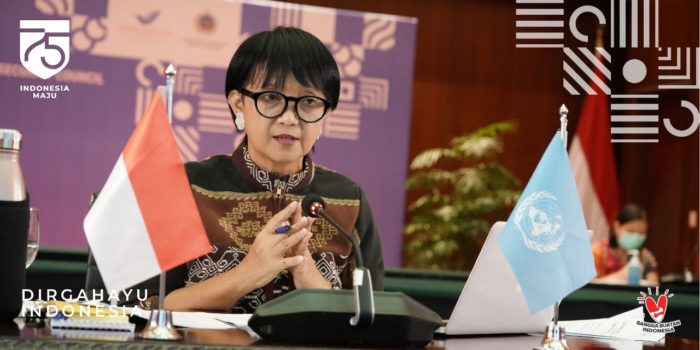 The pandemic has raised the fragility of conflict-affected countries and even risk them to fall back into crisis, according to Minister of Foreign Affairs Retno Marsudi.

The Minister made the statement during the virtual meeting of the United Nations Security Council (UNSC) open debate on pandemics and the challenges of sustaining peace, Wednesday (12/08).

The meeting was chaired by Retno Marsudi as the President of the UNSC. Also present during the meeting were, among others, UN Secretary-General Antonio Guterres, former UN Secretary- General Ban Ki-Moon, and Director of Center on International Cooperation of the New York University, Sarah Cliffe.

In her national statement, the Minister underlined three main points in response to the increasing global challenges to sustain the global peace during the pandemic:

Second, sustaining peace requires synergy among the agencies of the UN. In this regard, the UN should integrate conflict-sensitive approach into its pandemic response. General cessation of hostilities and humanitarian pause would enable timely delivery of aid and COVID-19 treatments to civilians in conflicts.

​Third, it is important that countries optimize the use of the limited resources at hand for sustaining peace, as the majority of the countries are now faced with a hard choice between spending on health infrastructure or peacebuilding.

Indonesia also highlighted the latest Report by the UN Secretary-General on Peacebuilding and Sustaining Peace, which documented a decline in share of official development assistance (ODA) for peacebuilding in conflict-affected countries. Therefore, innovative funding for peacebuilding through the South-South and Triangular Cooperation as well as philanthropic institutions is essential in the current situation.

Amid the growing uncertainties caused by the global pandemic, peacebuilding and sustaining peace efforts have become even more daunting. Against this background, the Minister calls for the UNSC to remain optimistic that such crisis may also create an opening for peace. “Let us use this momentum to better sustain peace,” she stated to close her remarks.

Indonesia’s leadership in setting the agenda for this month’s UNSC sessions are welcomed by Council members. Several high-ranking officials of UNSC member states, including Minister of Foreign Affairs of Viet Nam, South Africa, Estonia, as well as Minister of State of Germany participated in the meeting. (Ministry of Foreign Affairs/EN).