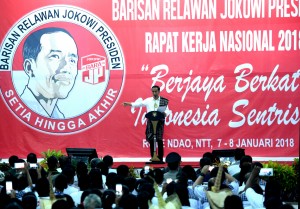 Previously, it was managed by a foreign company PT Total E&P Indonesie (TEPI) and the contract expired on 31 December 2017.

The Indonesian Government does not extend the permit to manage the Block, which is located in East Kalimantan, and decided to take over the management of the Block through PT Pertamina.

Now I leave it to PT. Pertamina. Previously, we even did not have one percent of share ownership, now we have 100% of shares at the Block. We leave it to Pertamina to manage the Block, the President said in his remarks at the National Coordination Meeting (Rakornas) of Barisan Relawan Jokowi Presiden (Bara JP) year 2018 at Auditorium Tilangga, Pulau Rote, East Nusa Tenggara (NTT) Province, Monday (8/1).

Regarding the issue of mining company Freeport, President Jokowi said that the Government wants a bigger portion of share ownership at Freeport and it is now being processed.

According to the President, for dozens of years, the Indonesian Government has only been given 9.3 percent of shares at the mining company, which is located in Timika Regency, Papua.

Ive instructed related ministers so that we have at least 51 percent of shares of the company. But its been three years; yet the negotiation is not finished yet, the President said.

Previously during a meeting held at the office of the Ministry of Energy and Mineral Resources in Jakarta at the end of August last year, attended by Minister of Energy and Mineral Resources Ignasius Jonan and Minister of Finance Sri Mulyani Indrawati, Freeport McMoran CEO Richard Adkerson said the company agreed to divest 51% of its shares to be owned by the Indonesian Government. However, the details of the agreement are still being negotiated by the Government and Freeport. (UN/RAH/ES) (EP/YM/Naster)