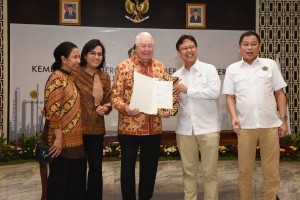 Divestment of 51% shares of mining company PT Freeport Indonesia (PTFI) to the Indonesian Government has officially been agreed on.

This signing ceremony was witnessed by, Minister of Energy and Mineral Resources Ignasius Jonan, Minister of State-Owned Enterprises Rini Soemarno, Minister of Finance Sri Mulyani, and Minister of the Environment and Forestry Siti Nurbaya.

Under the agreement, PT INALUMs share ownership at PT Freeport Indonesia (PTFI) has increased from 9.36% to 51.23%, while the Papua Regional Government will have 10% out of 100% of PTFIs shares.

PT Freeport share divestment process has been completed. And the next step is the administrative process between PT Freeport and PT INALUM, Ignasius Jonan said, adding share ownership will be official after payment amounting US$3.85 million – equal to 56 trillion Rupiah – to Freeport McMoRan Inc. (FCX) has been made, expected before the end of 2018.

Following the signing of these agreements, Jonan added, the Government will issue a temporary special mining permit (IUPK) with the operation duration of 20 years until 2041.

PT Freeport Indonesia is also required to build smelters with the capacity of 2 – 2.6 million tons each year and we will continue to monitor and evaluate their development. The building of those smelters is expected to be completed in less than 5 years, Jonan added.

Jonan went on to say that regarding the IUPK for PT Freeport Indonesia, the Government is committed in maintaining investment to ensure security and assurance to foreign investors to invest in the country.

In the meantime, Minister of State-Owned Enterprises Rini Soemarno said that PT INALUM had expressed its commitment to finalize the divestment process on time and the Minister expressed appreciation for that. She added that the management of PT Freeport Indonesia would also involve Papuas Government by holding 10% of the companys shares and expressed hope that Papuans will benefit from its operation.

In line with the efforts to develop downstream sector of Indonesias mining industries, we will continue to push PT INALUM and PT Freeport Indonesia to be involved in the efforts. And we will not stop at building smelters only, but will also embark on the processing of anode slime as a derivate product of smelters that will be processed as gold, Rini said.

Furthermore, Minister of Finance Sri Mulyani said that to support the operation of PT INALUM and PT Freeport Indonesia, the Government has pledged to provide certainty on tax obligation and non-tax obligation, both at the Central and regional levels.

Following the finalization of share divestment of PT Freeport Indonesia and the transition of Contract of Work (CoW) to IUPK, we can ensure that PT Freeport Indonesia will contribute to give a significant amount of revenue to the Government as opposed to when it operated with the CoW, Sri Mulyani said. (Communication Team of Ministry of Energy and Mineral Resources/ES) (HYP/EP/Naster)