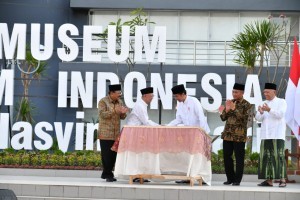 During a working visit to Jombang Regency, East Java Province, on Tuesday (18/12), President Joko Jokowi Widodo inaugurated the Indonesian Islamic Museum K.H. Hasyim Asy’ari located near to the Tebuireng Islamic Boarding School which was established by K.H. Hasyim Asyari in 1899.

This museum reminded us that Islam entered our country with a very peaceful process, through dialogue and local arts as the medium, such as poetry, puppets, songs and others, President Jokowi said.

I also want to remind you that the Unitary State of the Republic of Indonesia with the Pancasila ideology is actually formed by ulemas (Islamic scholars), santri (Islamic students), Muslims, together with other Indonesian elements, said the President.

Thus, President Jokowi explained that he marked 22 October as the National Santri Day to remember the struggle of K.H. Hasyim Asy’ari in maintaining Indonesias independence.

The ulemas loved our country so much that they courageously declared a war to defend Indonesias independence as their jihad, President Jokowi added.

As the President of the Republic of Indonesia and as part of the Muslim community in Indonesia, I would like to express my deepest gratitude to Gus Solah and the extended family of Tebuireng who have contributed greatly to Muslims in Indonesia, said President Jokowi.

Meanwhile, Gus Solah explained that the Indonesian Islamic Museum K.H. Hasyim Asyari has sources that explain the process of how Islamic organizations such as Nahdlatul Ulama (NU), Muhammadiyah and Indonesian Islamic Party (PSII) accepted Pancasila as the ideology of Indonesia.

Indonesia is a blend between the Indonesian culture itself and Islamic teachings. No wonder there are a lot of Islamic law assimilates into the state law, said Gus Solah.

For the record, the construction of the museum standing on an area of 4.9 hectares was funded by the State Budget through Ministry of Education and Culture as a form of respect for Islamic scholars who have contributed greatly to the Indonesian independence. (BPMI Setpres/ES)