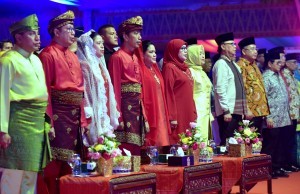 President Joko Jokowi Widodo called on all Indonesian Muslims to see Musabaqah Tilawatil Quran (MTQ, Quran Recitation Competitions) not only as an annual event and competition but as an energy booster for the Muslims to implement the values of Quran in real life, and everydays life.

We should be at peace every time we recite Quran, we should feel peace when we listen to the Holy Scriptures. The feeling must be preserved and promoted in our daily life, President Jokowi said in his remarks at the opening of the 27th National MTQ (Quran Recital Competition) in Medan, North Sumatra, Sunday (7/10).

I believe with manifesting that value, there will be no more hoaxes, slanders, defamation spreading among the people. Any conflictshall never exist among fellow Indonesians, the President firmly said.

The President reminded the participants that Islam is rahmatan lil alamin (blessing for the universe) that brings blessing for all people as well as the country.

Thus, President Jokowi added that Muslims must maintain harmony, brotherhood, and unity because these three aspects are the main pillars of Indonesia to move forward and become our source of energy to realize a prosperous nation full of Gods blessings (baldatun toyyibatun wa rabbun ghafur).