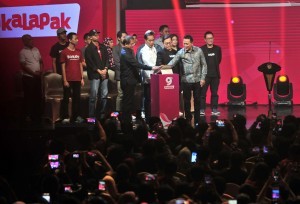 President Jokowi accompanied by a number of high ranking officials and CEO of Bukalapak at the launching of Mitra Bukalapak (Bukalapak Partner), at Hall B Jakarta Convention Center, Senayan, Thursday (10/1). (Photo by: Jay/ PR Division)

There are 56 million Micro, Small, and Medium Enterprises (MSMEs) in Indonesia. Therefore, issues regarding how to build a brand, to create a design that could meet market demand, to make a packaging that attracts customers, and other issues on capital and access to the market are envitable, according to President Joko Jokowi Widodo.

The issues can be solved one by one if business and private sectors cooperated with the Government in developing the country, President Jokowi said at the Commemoration of the 9th Anniversary of e-commerce Bukalapak and Launching of Mitra Bukalapak (Bukalapak Partner), at Hall B Jakarta Convention Center, Senayan, Central Jakarta, on Thursday (10/1).

Therefore, President Jokowi called on Bukalapak to connect online and offline commerce. That means all MSMEs and Small, and Medium Enterprises (SMEs) in Indonesia can join Bukalapak.

The MSMEs and SMEs can cooperate with Ministry of Industry or Ministry of Cooperatives and Small and Medium Enterprises in improving their packaging.

According the Head of State, during his working visit to villages, he felt down when knowing that home industry products from the villages, even though the quality of their products is good, cannot enter the market just because they have a poor packaging and do not represent a high quality brand.

On that occasion, the President reminded people that foreign products should not replace products from our SMEs that can not enter the market. Do not let our market place only sell foreign products. We can accept it for the time being, but for medium term, we must work together so that the products (in market place) will be dominated by Indonesian products, he firmly said.

The President also admitted that four million traders in Bukalapak is a quite large number. However, compared to 56 million MSMEs in Indonesia, Bukalapak still has many works to do to facilitate the remaining 52 million MSMEs. This is also the duty of the Government and related ministers to encourage 56 million enterprises to join Bukalapak, he added.

President Jokowi expressed that he is glad to hear that 70 to 80 percent of Bukalapak traders comes from SMEs. Not to mention that the Government has selected Bukalapak as a credit channeling instrument to the SMEs under one program named Kredit UMi (Ultra Micro Credit).

I think it is great. The credit instrument will bring benefits to our micro businesses, President Jokowi said.

On that occasion, President Jokowi also said that we must look up to Ahmad Zaky, the founder of Bukalapak who established the company with initial capital of only Rp80,000. His story can inspire all young entrepreneurs in Indonesia.

Thus, President Jokowi expressed his hope that Indonesia’s startup unicorns including Bukalapak to not only focus on the growth of the digital economy and make profit, but also to have social missions. Moreover, all players of digital economy are expected to have the same spirits.

At the end of his speech, President Jokowi accompanied by Achmad Zaky, Minister of Communication and Informatics Rudiantara, and Head of Creative Economy Agency (Bekraf) Triawan Munaf pressed a symbolic button to mark the launching of Bukalapak Partner.