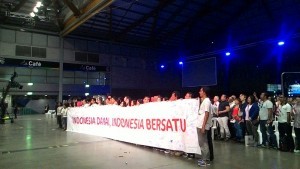 The declaration for Peaceful and United Indonesia by Indonesians in Sydney, Australia, Sunday (6/11)(Photo by: Public Relations Division/Said)

Indonesian Ambassador to Australia Najib Riphat Kesoema in his remarks said that  Indonesians under the leadership of President Jokowi is now promoting development in order to be able on par with other nations.

We need good governance of the country. We need to build infrastructures to connect the whole nation. We cut bureaucracy. We wipe out corruption and illegal levies. We uphold law enforcement indiscriminately, Najib said.

Najib added that Indonesia in the future belongs to Indonesias young generation and on that occasion, Indonesians gather to have a joint determination for a united and peaceful Indonesia.

History shows that nothing can divide Indonesian people. No one can destroy our MerahPutih flag and no one can jeopardize our unity and peace, Najib said.

The Ambassador added that there are many Indonesians in Australia, which is 72,000 people and around 1,000 people attended the event. The event wasattended by Minister of Trade EnggartiastoLukito, Head of the Investment Coordinating Board (BKPM) Thomas Lembong, Indonesian Ambassador to Australia NadjibRiphatKesoema, and Indonesian Consulate General in Sydney YayanGH Mulyana.

On that occasion, President Jokowi expressed his apology because he could not meet them in person because the situation in the country needs attention. However, the President ensured that the situation is safe and there is nothing to be worried about.

I have telephoned Prime Minister Turnbull and told him that my state visit to Australia is postponed for a while and it will be re-scheduled. He very much understands this situation, President Jokowi said.

President Jokowi added that Indonesia continues to catch up with the development, especially concerning major problems related to gap, poverty, and unemployment.

Therefore, to catch up with the development, we continue to accelerate infrastructure development, accelerate de-regulation programs,and we hope we can compete with other countries, President Jokowi said. (SM/GMD/ES)(EP/YM/Naster)