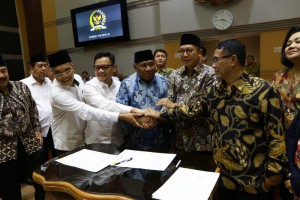 Minister of Religious Affairs Lukman Hakim Saifuddin said that the figure in US Dollar is 151 points lower than that of last year set at USD2,632. However, due to Rupiahs weakening against US Dollar, the hajj cost in Rupiah is similar to last years.

Indonesias BPIH is the lowest among BPIH in ASEAN countries, the Minister said after signing the BPIH agreement at the Indonesian Parliament Building, Senayan, Jakarta, Monday (4/2).

The Ministrys data also show that Indonesias BPIH seems to be higher than Malaysias but actually from the paid price, the Hajj pilgrims will get cash back as many as USD400 or SR1,500 from the Indonesian Government as a living cost during the pilgrimage, Lukman added.

The BPIH includes USD400 for living cost but it will still be given back to the Hajj pilgrims prior to their departure. So, the actual cost for 2019 BPIH is USD2,081 Lukman said. Moreover, Lukman continued, the quality of hajj service will be better compared to last years despite the similar amount of BPIH.

Hajj pilgrims will enjoy air-conditioned tents in Arafah, more urinals provided in Mina, and more bus service to serve those who stay more than 1 kilometer from the Al-Haram Mosque in Mecca, Lukman added.  (PR of Ministry of Religious Affairs/ES)